Swimming and diving wins double against Miami and FAU 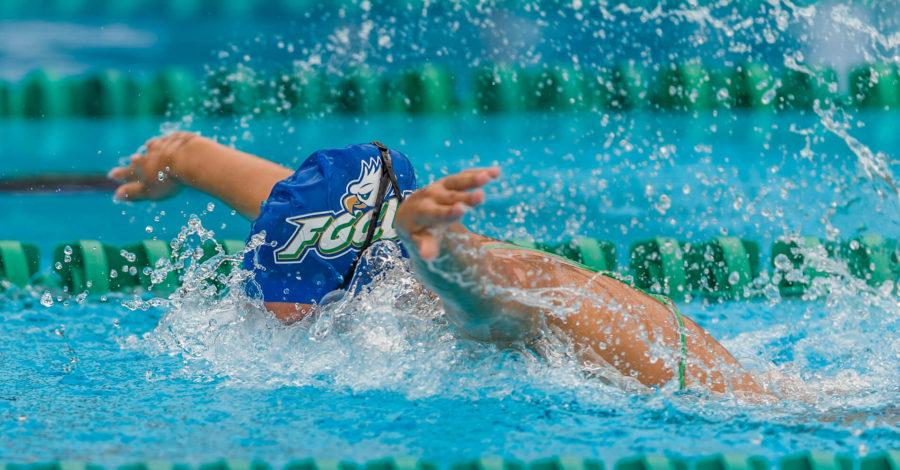 The FGCU swimming and diving team came home with a pair of wins against Miami and FAU on Saturday, Jan. 16 in the dual-meet at the FAU Aquatics Center.
The Eagles won 10 of the 15 events on Saturday, with Elise Haan and Katie Armitage leading the way in the individual events. Haan finished first in the 100-yard and the 200-yard backstroke, marking her 11th and 12th wins of the season. Armitage also took home a pair of wins in the 100-yard and the 200-yard breaststroke, earning her 13th and 14th wins of the season.
Christina Kaas Elmgreen earned a win for the Eagles in the 200-yard butterfly, clocking in a 2:01.98. This marked her second individual win of the season in the event.
FGCU took first and second place in the 50-yard freestyle. Katie Latham finished first, touching the pads at 23.77 seconds, and Sara Hamilton finished second, touching the pads at 23.96 seconds.
Other individual wins in the dual-meet came in the 500-yard freestyle and the 200-yard IM. Lani Cabrera finished first in the 500-yard freestyle, nearly four seconds ahead of the competition. The Eagles swept the 200-yard IM, with Cabrera finishing first and Fanny Teijonsalo and Yee Ching Wong finishing second and third.
The Eagles earned two wins in the relay events, finishing first in the 200-yard medley relay and the 200-yard freestyle relay. The team of Haan, Armitage, Wong and Hamilton clocked in at 1:44.01 in the 200-yard medley relay, less than a second in front of the competition. In the 200-yard freestyle, the quartet of Latham, Armitage, Hamilton and Haan took first with a time of 1:34.95.
Ashley Wright also earned a season-best performance in the diving portion of the meet. Wright, a five-time CCSA Diver of the Week, placed third in both the 1-meter and the 3-meter dives. Wright’s score of 284.55 in the 3-meter beat her season-best score by nearly 8 points and ranks as the fourth-best score in program history.
“We were able to get a couple of good wins on the road today,” FGCU head coach Neal Studd told FGCU Athletics. “We had some girls really step up in some areas I was very excited about, and we’re looking forward to ramping up for Senior Day next week and championship season.”
After the successful meet, FGCU improved its dual-meet record to 11-1, while also improving its all-time record to 6-1 against the Hurricanes and 9-0 all-time against the Owls.
The Eagles will host FIU at 11 a.m. Saturday, Jan. 23 for FGCU’s Senior Day. The five FGCU seniors will be honored before the meet at the FGCU Aquatics Center.