Women’s basketball welcomes NJIT to the conference with a blowout 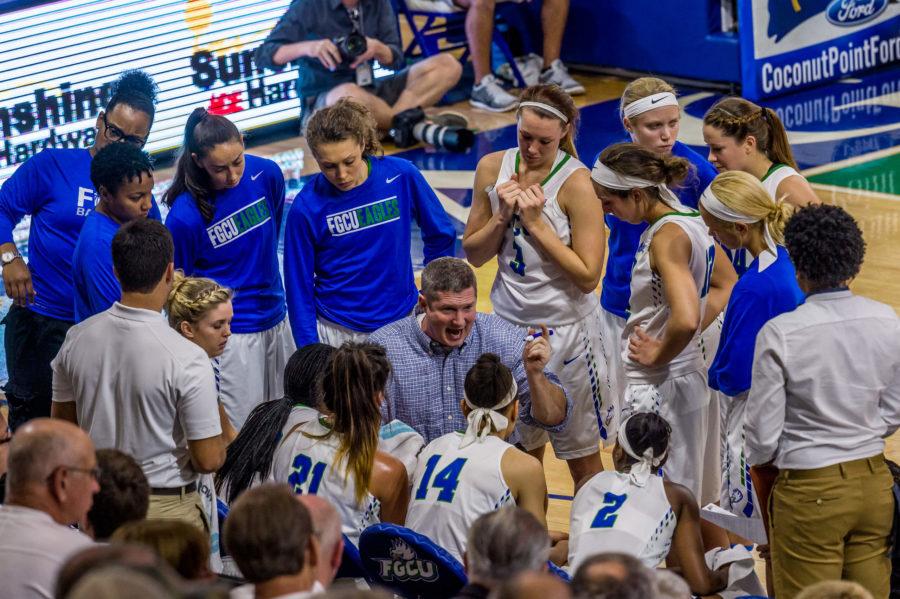 In a battle of the shores, FGCU hosted New Jersey Institute of Technology in the first meeting of the programs on Monday evening.
The Eagles sent NJIT home with a 33-point loss, making the Highlanders 0-3 in their new conference. Meanwhile, the Eagles boast a 3-0 conference record, eight consecutive wins and have not lost a home conference game since 2009.
It was a night for all Eagles to celebrate, as the revolving door of substitutes kept spinning.
FGCU head coach Karl Smesko kept the legs fresh and the ball moving. Nine Eagles saw the floor in the first quarter alone. Every Eagle touched the floor during the game.


The NJIT 2-3 zone wasn’t able to keep the Eagles out of the paint or off the arc. The seams were left open after a few passes while the three point line — the Eagles second home — was often left undefended after any rotations were made.
A halftime score of 33-18 was telling of the direction of the game, unless something changed. Yet, NJIT continued with its 2-3 zone.
With little to no change in their play, the Eagles continued to capitalize on their ineffective defense while improving their own shooting numbers.
“We were trying to work on our ball movement and create as many open shots as we could,” Smesko said “Overall, I thought it was a really good effort. We took care of the ball. They’re really active in their zone. They gave Stetson all kinds of problems with it. Our team took care of the ball and got some pretty good shots.”
Next, FGCU will hit the road to face Lipscomb on Saturday, Jan. 23, followed by two more away conference games the following week.
“We’ve actually played much better on the road this year to this point,” Smesko said. “I think it’ll be good for us to travel together. We’re trying to compete every time we go out on the court. The biggest thing is staying focused, and sometimes, the focus is even better on the road.”
The Eagles took a win in conference play at Alico Arena the last time they faced Lipscomb.
Delete Image
Align Left
Align Center
Align Right
Align Left
Align Center
Delete Heading