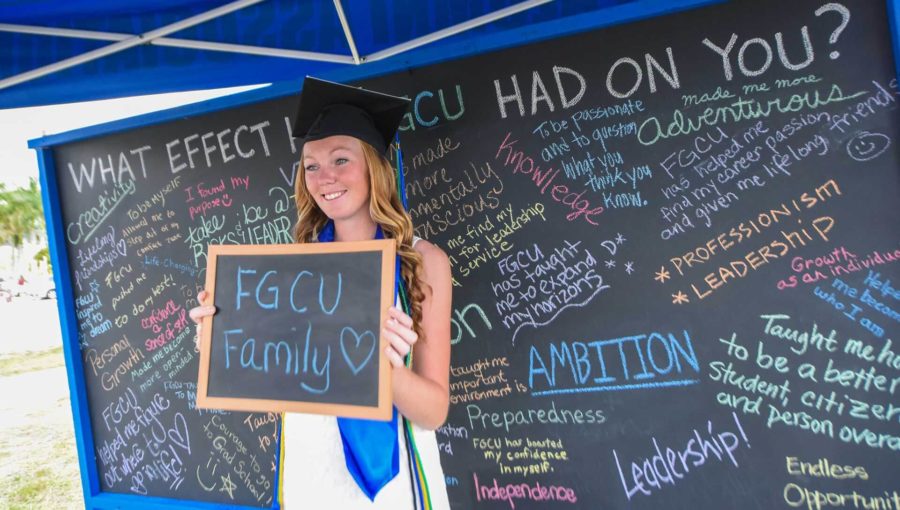 On Saturday, Jan. 16, the women’s basketball game against USC Upstate centered on more than just Raining Threes. The FGCU Effect’s new TV spot premiered during halftime, a commercial which spotlights FGCU’s best qualities.
The video focuses on several aspects of FGCU, including how it was formed almost 20 years ago, what different programs are offered to students, as well as life on campus and how students and faculty make use of the campus’ natural environment.
In an attempt to spread FGCU’s accomplishments outward to a wider audience, the University Marketing and Communications team launched The FGCU Effect, a branding campaign that began in early 2015.
Guillermo Fernandez, an FGCU alum whograduated in 2015, served as the producer of the video and believes that working with students benefited the video tremendously.
“Working with students was very natural, and it was also a learning experience,” Fernandez said. “I learned a lot about FGCU through students’ eyes. One of the best parts of the interview process was learning how FGCU has impacted them.”
Planning for the video began in late October, when Fernandez first began working with The FGCU Effect. There were nine to 10 separate shooting days, with the bulk of scenes shot from Dec. 1 through Dec. 3.
“It was a little hectic,” Fernandez said. “It was a long process getting everything approved. Editing went really well. We had a different approach to our storyboard.”
Keyanna Davis, a junior communication studies major, starred in the video amongst other students, and thought the entire experience was rewarding, from the audition process to its debut.
“The casting call process was quite interesting and a lot of fun,” Davis said. “The other students were cool. The producers and staff were super nice and patient with all of the first timers, like myself. Everyone made me feel very comfortable.”
Davis explains that the video means a lot to her personally, and participating in it reflects just one of the many opportunities this university has given her.
“The video represents the endless opportunities and new experiences that FGCU has to offer and are made available to me,” Davis said. “I am just so glad to have been a part of a production that truly captures the essence of our diverse community and academic settings.”
This campaign wasn’t the university’s first time developing a strategic marketing plan. In 2013 Neustadt Creative Marketing, a third-party market research group, was hired. This group studied FGCU’s main audiences and began developing brand themes that would help start campaign development, thus inspiring The FGCU Effect.
“We wanted people to enjoy it,” Fernandez said. “A lot of stuff you see out of colleges will put you to sleep.”
Fernandez is hoping that the video will inspire prospective students to do more research about the university and what it has to offer.
“I hope it inspires some students to come here,” Fernandez said. “My goal is to really inspire more students to get on the campus and experience FGCU. And if they come here and feel like home, hopefully, they’ll attend the university.”
The video will be shown on local markets as well as ESPN.