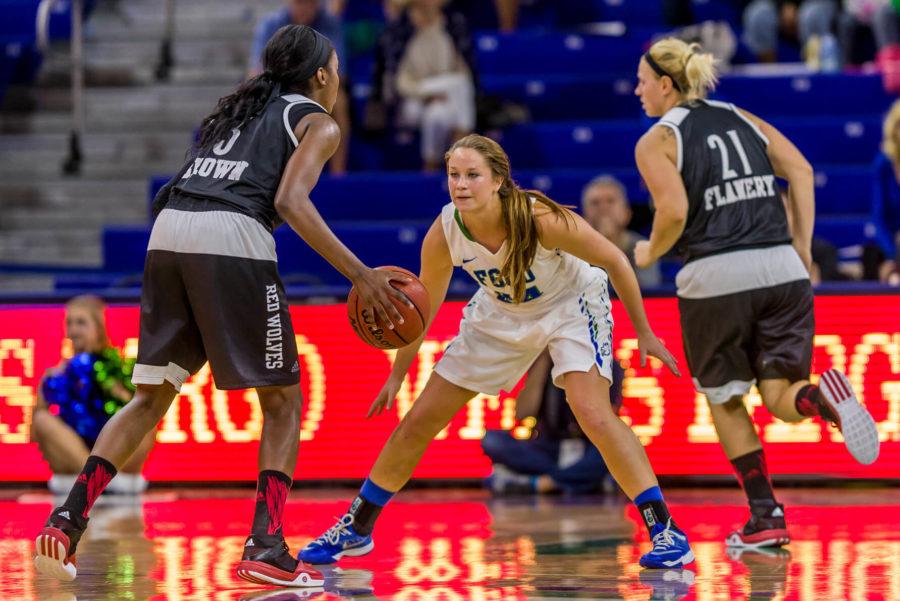 FGCU women’s basketball advanced to 4-0 yesterday against the Lipscomb Bison’s.  It was #RainingThrees all night for the Eagles. FGCU  passed its season high in three-pointers made with 15 in total.
Lipscomb came in missing point guard Loren Cagle, who is ranked 5th in the nation in assists total.  As compared to FGCU’s 10-player bench and a total of 15 player roster, it was looking like David and Goliath with different results.
This time around Goliath, FGCU, won by 32 points in a lopsided 72-39 final score.  The problems just kept on pouring in for Lipscomb.  Lipscomb missed 11 three-point attempts, problematic for a team that leads the conference in three-point percentage.  On top of that, on average, FGCU keeps opposing teams from scoring over 50 points.  Lipscomb now holds a 0-4 start in its conference play.
FGCU coach Karl Smesko has demonstrated he favors the small ball approach.  Starters for the Eagles consisted of Kaneisha Atwater, DyTeisha Dunson, Whitney Knight, Jaime Gluesing and Taylor Gradinjan.  It was a rough game for Atwater as she only posted 5 points and went 0-4 from deep.  However, Atwater demonstrated hustle and determination in grabbing the most rebounds on her team with six at the guard position.
The undisputed impact player of the day was senior Whitney Knight.  She was simply instrumental for FGCU with 25 points followed by four rebounds and four assists.  She completely scorched Lipscomb’s perimeter defense with seven threes.  It was a LeBron-like performance for Knight.  The scoring flux seemed to travel throughout the team were Gradinjan and Jessica Cattani both had nine points. Haas also dropped 12 points on top of that. It’s safe to say that the Eagles locker room must be electric, as they simply took care of the Bison’s undermanned unit.
Having this been the sixth straight road victory for the Eagles, Smesko had a few words about his team’s performance.
“Whitney coming back from injury was a great boost for us,” Smesko said. “She was really outstanding for us in the first half today and helped us build a lead but as a team, the beginning of the second half was when we played our best basketball.”
Lipscomb came into this game at a disadvantage with a total of eight players on the bench.  The Bison came into the game without their starting point guard Loren Cagle. Sophomore Riley Northway seemed to be the only Bison putting any kind of offensive fight up for Bison coach Greg Brown.
Northway led in both scoring and rebounding categories.  She had nearly a double -double with 10 points and eight rebounds. Behind her was No. 11 Amber Fuqua with nine points. For the entire duration of the game, not once could the Bison’s obtain the lead.
Lipscomb only shot 14 percent from three-point range.  The Bison poorly handled the ball for a total of 18 turnovers.  Lipscomb was dismal from the free-throw line with 56 percent. For a very limited bench, Lipscomb was in serious foul trouble with four players with three or more fouls.
Now the Eagles, led by senior Knight, travel to Georgia to challenge Kennesaw State.  Knight is the reigning A-Sun Player of the Year.  Since Knight’s return this year, she has helped ease the Eagles flight path with a 9-1 record.  Furthermore, Knight leads the A-Sun conference in blocks with 31 and has converted 21 threes in only 10 games.
The Eagles have strong leaders on its forefront with Smesko, Atwater and Knight to give them a solid chance to win the A-Sun conference and return to the NCAA and hopefully get revenge on FSU.