A letter from Director of Athletics Ken Kavanagh 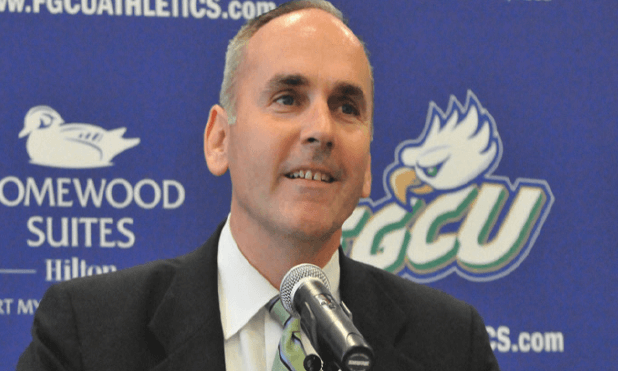 As stated at our recent nationally televised “Midnight Madness” on ESPNU- It’s Time!

Hoping you are off to a great start to the year, we need you ready for another exciting year of FGCU Hoops! Currently in my fifth year as your proud AD, I can’t remember ever being more excited for the start of a season. As demonstrated so often last year, a big key for our programs to make the NCAA Tournament once again will be you … the students! Last year we made tremendous strides in making “The Nest” one of the toughest places (we were a combined 28-3) to play and now we need to take it a step further – starting next Tuesday with our hosting of “Breakfast at the Beach” on ESPN2 at 7AM – hopefully in front of a packed house!  Two of the most memorable moments in my time at FGCU were in March of 2011 and last November in Alico when the women’s and men’s teams played in front of the first ever sellout crowds in school history, when we respectively hosted Florida in the WNIT and eventual ACC Champion Miami, when we knocked off the Canes in our home opener. Both of those boisterous crowds of 4,500 plus fans were partially made possible due to over 1,000 students showing up. The atmosphere was electric!  Your commitment to supporting our teams was reaffirmed the first day of this semester when over 3,000 students attended our fourth annual Eagle Revolution. Likewise, with a record 2,500 plus registered for the “Dirty Birds” Student Section. In turn, if this season is anything like our previous six in Division I, the “Dirty Birds” & company will have plenty to cheer about as the ladies continue to “Rain Threes” at a level that has led the nation at record breaking pace the past three years, and the guys continue to make “Dunk City” a moniker to be enjoyed watching and reckoned with playing against!

Our coaches and student-athletes are ready for another big year and we need your help make Alico as intimidating as possible! Hopefully this will result in our earning the A-Sun regular season titles and the opportunity to host all of our conference tournament games, as we compete to once again become a factor in March Madness. Also, in addition to next week’s opener, we have a number of other regional and nationally televised games and all the remaining ones will be seen live on ESPN3. All terrific opportunities to showcase the Green & Blue and our wonderful University to an ever increasing interested audience.
Let’s Get It Started! Go Eagles!
Ken Kavanagh
Director of Athletics
[email protected]