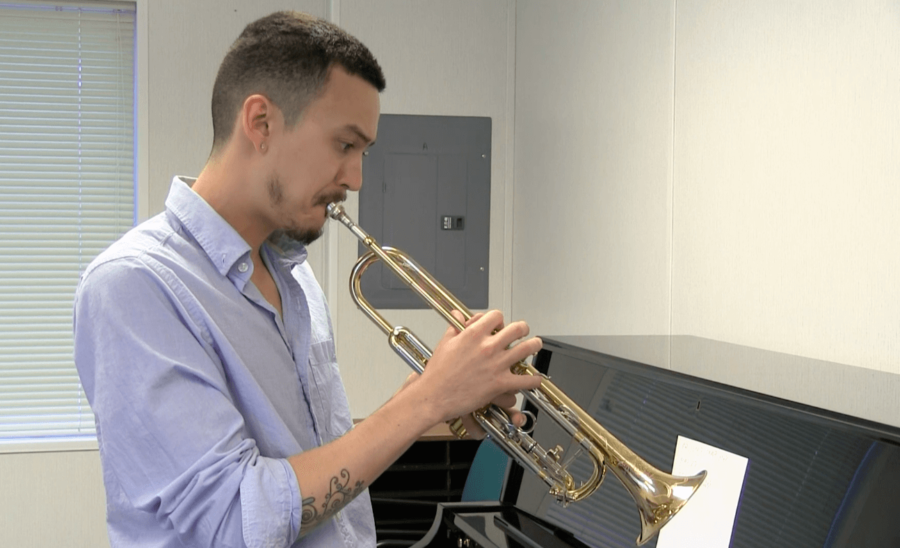 There is something so enticing about how music naturally flows from one genre to another in a matter of seconds — well, if done correctly. FGCU student Alec Prorock proves how effortless that could be with the drop of his first solo album, “Cloud Chameleon,” released on Feb. 14.

Prorock is pushing genre boundaries with “Cloud Chameleon,” parading an intricate sound that sits somewhere between indie and jazzy, throwing some R&B in for good measure.

The album starts off with the laidback song “Vivian Tilana,” which neatly grows into a trip-hop tune that shows off Prorock’s musical talent. Such a versatile song will leave you hungry for what’s coming next.

A standout on the album would be “Take A Deep Breath,” because it not only has smooth slow-jam vocals but it also showcases Prorock’s trumpet talents. Giving the trumpet a solo part in the song was unique and really set the song apart from the rest of the album. It’s these finer details that make the record more personal and inviting.

As for “Neo, Green,” it started off strictly instrumental until there was about a minute left in the song. Normally, I tend to skip these songs off any album, but it gave off a dream-like atmosphere that kept me interested.

For “Lovebloom,” it seems that Prorock relied mostly on his vocals for this piece. He coils his voice impressively around the chill vibes in the background. The song is a definite highlight with downright addictive chorus lyrics sure to get stuck in your head.

The first single, “Say What You Say,” tells the story of how it is fine to grow up and move on from the negative parts of your life. Prorock definitely gets his point across with the varied instrumentation and the flowing trumpet playing.

Some songs off the record, like “Good Knees,” “A New Leaf/Lyonia, “Everything is Beautiful” and “Galina Yellow” remind me of the band Glass Animals in the sense that they both combine different genres together so easily. What Prorock does that’s better, is his music keeps you interested with how every song is expertly woven together. After a couple listens, you can’t help but try to peel back the layers of each track to see what’s hidden within. Whereas with Glass Animals, I find myself getting bored and wishing for something unexpecting to happen.

Prorock ends the record strong with “Your Own Dance Floor,” which is quite different from the rest of the album. It’s danceable and fun, just pop on some headphones and let the song take you with the seductive build up before erupting into a warm wash of electronics.

“Cloud Chameleon” is a tidy collection of soft, ambient sounds, and Prorock really demonstrates that he has a knack for teaming offbeat jazz techniques with impossibly cool R&B bass lines and addictive vocal hooks. As a first release, “Cloud Chameleon” is pretty impressive. I get the sense that Prorock didn’t want to take the safe route with this record, and I truly commend that because it worked out in his favor.