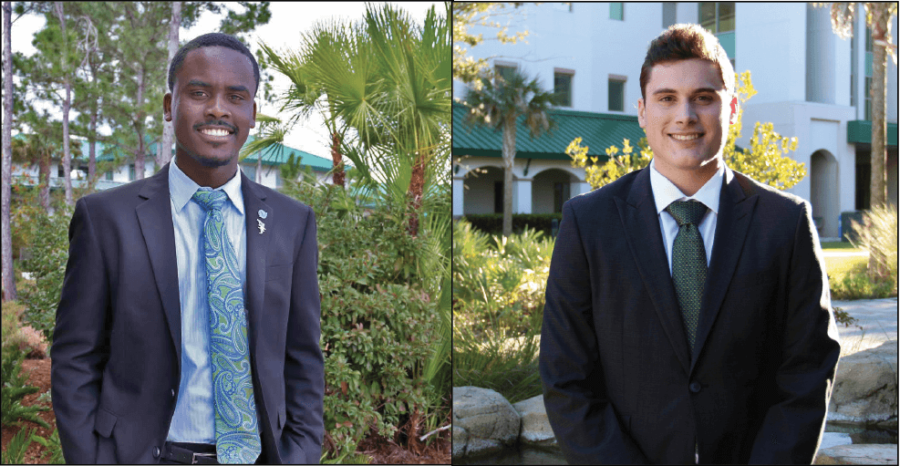 Interview with Jack Emmer, the presidential candidate for the FGCUnited party
1. Why did you decide to run for student government president?


I decided to run (because) I think there’s more we can do for the student body. Student Government this year has been really focused on our clubs and organizations, and that’s great. I’m all about helping them as best we can, but there’s so much more we can do.
There’s students who come here literally just for class, and then, they leave. We need to find ways to not only get them engaged but helping them out.
2. Why did you get involved with student government in the first place?
This goes back to fall of 2014. Our hockey team was struggling to get funding, and unfortunately, there was a deal in the finance code that was making it harder to get it through. I saw it as a calling to get involved more in the community.
I think it’s important that we have every organization that we can be represented in those positions. It brings different backgrounds.
3. What initiative are you most excited about implementing if you’re elected?
What I’ve been preaching about the most all day is extending library hours. I feel like that is something that been campaigned in the past, and I think it’s more than just making the library more accessible to everyone but also creates opportunities for jobs which in itself is a resume builder for people who want to work in libraries and want to be historians.
4. What is medical amnesty?
It’s an unfortunate reality that not just freshman but all students who come here are interested in partying. Medical amnesty protects students from getting in trouble. Let’s say they are out causing trouble and their friend happens to be unconscious and really needs medical help, it will keep them from being hesitant to call the authorities for the help needed. I think it’s really important. It’s been implemented in other schools. It’s a way of protecting students from that worry that they’re going to get in trouble for just trying to help another student.
5. How would you implement the parking app mentioned in your platform?
It would be an app program. We would have to find a company that would help us create it. We want to try to get mirrors in there. It is a dangerous area on campus. I think that’s just common sense right there, and that’s a way we could be more efficient.
6. What is the poncho program mentioned in your platform, and how would you implement it?
The ponchos would be some sort of dispensary that we would create, and we would make it so students aren’t getting soaked from their car. We have $300,000, and that’s a meaningful project for the whole student body. The weather down here is crazy during the fall. It’s just another way we’re trying to help the student body more as a whole.
7. How would you implement the book swap program?
That was an idea that my treasurer Zac Livesay, who’s been very involved in creating this platform, really pushed for, and he thinks it’ll be very easy to implement. It’ll just be through Student Government, and we would have specific dates during the semester. We’d set up a stand and people could bring books and swap them for the books they need, it would also force more of a community atmosphere on campus where students can meet other people who can help them with books they need and ultimately save them money.
8. Why are you the ideal candidate?
I think I just bring something different. I’m bringing a platform that I truly believe that we can implement this year. I’m not just saying that I’m going to do something. I have an actual platform that’s different from previous years. Nothing we have on here is too crazy but can be felt by all our student body as opposed to only organizations and clubs. I’m not talking about spending and going crazy and going against finance code. I’m just talking about finding meaningful ways that we can give students their money, the money that is taken out of their credits, and putting it back into campus. That’s what makes our party different, that commitment to looking to help the whole student body. I’m really excited for this whole process. I think we have a very well put together platform; it says what we want to do, and the student body will value that, as opposed to saying stuff to just put on there.
9. You ran with Thieldens Elneus last year with his Synergy party. What made you run against him this year?
I have the uttermost respect for T. Basically, I had never met T until I was already in his party. I didn’t know fully that he was going to run. I didn’t think people ran for two times. I looked and saw something that I not only felt that I was capable of doing but that I could find a following that would be interested in joining me. It’s unfortunate that I have to run against him.
Interview with Thieldens Elneus, the presidential candidate for the The Nest party
1. Why did you decide to run again?

Currently, I serve as the student body president. The biggest thing that I noticed is that there’s a lot of things that weren’t able to be accomplished this year. One year is not enough time to accomplish those things, and being that the university is going to be in a transition period within the next year, it’s important to have SG be a stable ground where students have a voice.
Our platform is focused on student success, university advancement and community engagement. I’ve helped create relationships with a variety of different university-wide committees as well as have increased the amount of participation that students have in a variety of university-wide committees.
2. Why are you the ideal candidate?
What it comes down to is the experience. I’m not trying to be something I’m not. I have the experience as student body president. I know the work that it takes. I know there’s things to be done for the university and the students, and I think that my ideology behind creating relationships with the community partners, university committees, university student organizations as well as a variety of different groups has made me an ideal choice for this position.
3. Why did you get involved with student government in the first place?
I’ve always wanted to be in a position to represent students. I’ve been in student government realistically speaking since high school.
4. I know you haven’t released your platform officially, but what are some key points?
The biggest thing for us is that we’re focused on is university advancement and community engagement. We want to enhance campus activities such as tailgates, campus cultural events so that students can really feel a part of the campus and really impact the retention rate of students on campus, because that’s the biggest downfall students experience on campus — that there’s not enough to do and when there is something to do it’s not fun or it’s not enjoyable or they can’t do things that their age provides.
When it comes to student success, we want to expand the opportunities and resources for the multicultural students, the LGBT+ community and students with disabilities on campus. We want to really focus on student success in that manner.
We want to look into ways where we can encourage and engage the different community partners that we have so that we can get more fundraising for student organizations locally, so we can help RSOs really fundraise a lot because this is one of the biggest issues that RSOs face. They aren’t able to fundraise, or they don’t get enough money that they need.
We’re really trying to work on enhancing those relationships, so we can create more fundraising opportunities and essentially continue a program that we have which is getting more discounts for students within the local area.
We want to also increase the amount of students that we have participate in the Rally in Tally, FGCU’s day in Tallahassee, so the state legislature knows the impact that FGCU has on the students at the end of the day.
The (university) presidential search will commence starting in April, so we really want to have a strong student voice on that committee so we can have a student-focused university president. We want to make sure that students are there, that students are being heard and that students are around that decision-making.
We want to explore options to really work with our major campus partners such as Chartwells who’s coming in. We want to make sure there’s students a part of that advisory committee to work with that company to really come in strong.