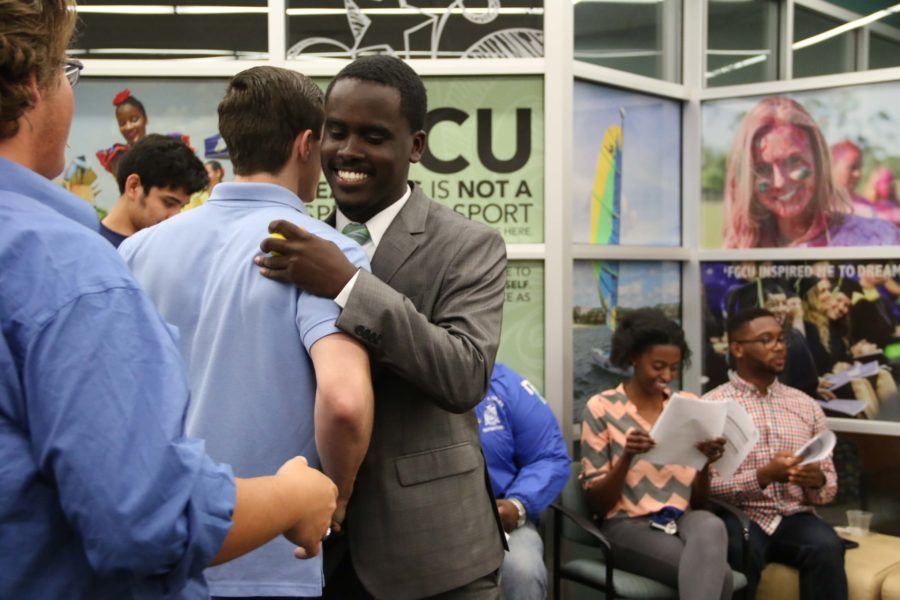 FGCU has a new student government — but not a new president. The FGCU student body re-elected Thieldens Elneus, from The Nest party, for his second term in the executive office. Along with Elneus, Emma Green and Ivan Rodriguez were elected as the vice president and the treasurer, respectively.

In total, 1,782 students voted in this year’s elections. Out of the 14,673 students enrolled at FGCU as of 2015, roughly twelve percent of the student body voted. Elneus and Green got 915 votes, which stands for 52.37 percent, while Emmer and Whittaker got 832 votes, which stands for 47.26 percent.
Ian Knight, the SG Election Rules Committee supervisor, announced the election results at 7 p.m. Thursday, March 3 in the fishbowl, on the second floor of the Cohen Center. The announcement came two hours after the three designated days for the elections ended at 5 p.m. Thursday, March 3. The elections began at 9 a.m. Tuesday, March 1.

Michael Rollo, the vice president of student affairs, and Michelle Yovanovich, the dean of students, attended the event.
“You showed class and integrity,” Yovanovich said to the group of candidates. “It’s not always like that between students, but it feels great.”
After giving a two-minute long speech at the event, Thieldens Elneus declined to comment about his re-election because he wanted to “get in the moment.”
“I’m a little speechless,” Emmer said, about his loss. “I’m a little disappointed. I’m so grateful for everyone who ran with me — my whole party … To be honest, I’m pretty shocked. To me, that was really close.”
Regarding his future involvement with SG, Emmer said he’s not sure where he’ll go from here.
“We’ll see,” Emmer said. “I don’t know exactly (about) future roles. Obviously, I dedicated myself to run for this position.”
Rodriguez said he wasn’t expecting to win, but he’s excited for the upcoming year.
“I’m feeling great,” Rodriguez said. “Obviously, it was a tough competition. You saw the numbers — neck to neck almost. The students spoke, and I can’t let them down now.”
The Nest had 22 candidates elected for senator positions, while FGCUnited had 11 senator candidates elected. Neither of the two independent senator candidates were elected.
“We did a lot of work, but hopefully, next year, we can have some students in our party step up who didn’t win,” Livesay said. “We still feel like our platform is very important, and we’ll still be getting involved because these are things that need to get done.”
The Student Government constitutional changes that were put in the ballot this year were also accepted — 1,672 students voted yes to the updates.
“This was our first electronic election,” Rollo said during the event, “and it was a big success. We had a lot of people voting, a lot of people excited about this.”