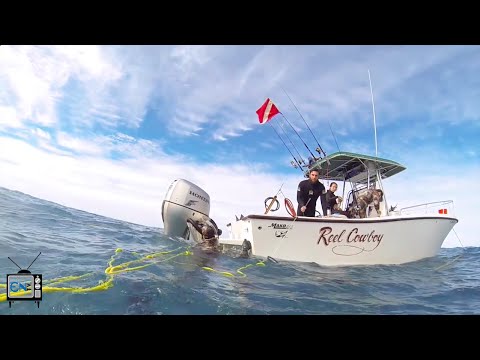 With an undefeated tournament record, three World Record holders on the team and its community involvement, who wouldn’t want to join the FGCU Spearfishing Club? Scavenging for fish year round may seem like an easy task, but with this group of people, it is a way of life.
Regardless of the weather, visibility or wind, these guys and girls always seem to find a way to get out in the ocean. Whether it’s for a tournament or just trying to shoot some fish while having a good time, this group never fails to bring back the ocean’s finest.
“The past two years, we have gone to Louisiana for the Louisiana (State) Freediving Championship,” said Cade Stokes, the club’s president. “This tournament was individually scored, and two of our guys (Blake Bidwell and Wesley Skinner) got first and second. We’ve also competed in the Naples Spearfishing Tournament, which was a team tournament, and the past two years, we’ve took first and second.”
Living up to all of these reputations may be tough, but as the first ever spearfishing club in college history, keeping this reputation is vital. Remaining on top is not an option for the club, it is a necessity.
“Every year, we compete in a tournament, called Battle of the Birds, in Islamorada, Florida against FAU,” Stokes said. “FAU was second to have a spearfishing club, so there’s always been this rivalry between us; however, we’ve won every tournament thus far.”
With these tournaments also come once-in-a-lifetime trips, which are routine for the well-traveled club. With semester trips to Boca Chita Key and Islamorada, this group never fails to have a good time while also doing what they are passionate about.
“We always go on a trip after each semester ends, so one in winter and one in the summer,” Stokes said. “We choose 25 people to go out of the 50 that are in the club; the decision is based on a point system. The more involved one is with going to meetings, community service, etc., then they have the chance to go.”
Even though this seems like all play and no work, giving back to the community is a top priority for the club. Hosting public events, taking part in community service opportunities and conserving the ocean from invasive species are just some of the many opportunities one has as a member of the club.
Hosting the first ever Lionfish Derby in Southwest Florida is one of the biggest events the club holds. Catching about 460 lionfish and having a cook-off competition that fed about 250 members of the public, this conservation movement in Matanzas, not only gave back to the community, it helped eliminate some of the most invasive species of the gulf.
“We held this event last year and two years ago,” Stokes said. “It’s our way to give back to the community while also helping the gulf.”
Along with this event, the club spends a lot of time trying to help the environment. With beach cleanups, car washes and open community events, opportunities are both beneficial for the locals and the club.
“We get money from the school every year, but we also get a lot of money from these community service events, which goes towards our tournaments and equipment,” Stokes said.