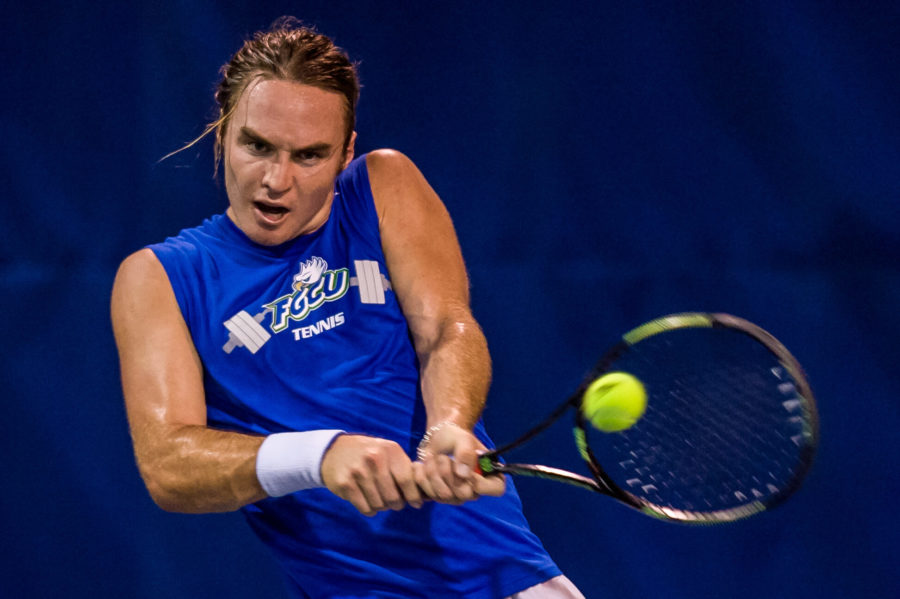 The FGCU men’s tennis team felt indifferent this weekend, starting off with a loss against Troy, but ending strong with a win against Georgia Southern on Sunday.
The Eagles took an early lead at the match Saturday against Troy with two doubles wins. Lucas Vaz and Ricky Ventura defeated Daniel Bustamente and Hassan Ndayishimiye. Andres Alfonzo and Ezequiel Cerrini then defeated Andre Baldo and Pablo Moreno to secure the point.
Then, FGCU dropped the lead as Troy’s No. 5, Mustapha Belcora, and No. 6, Andy Lau, came back to defeat their opponents and tie the match at 2-2.
The Trojans went on to win the match, with wins from the No. 3 and No. 1 singles.
With redemption in mind, the Eagles took on Georgia Southern in Sunday’s match. FGCU started off with losses in the doubles matches to Georgia Southern, but earned four singles win to claim a 4-3 win.
Defeats at the No. 1 and No. 3 doubles, the Eagles trailed 1-0 as the match went into singles play. The duo of Ventura and Vaz fell 6-1 to Christian Kerrigan and Rise Lanne. GSU then claimed the point as Landert and Fernandez dropped a 6-3 match to Eddie Landin and JC Alcala at the No. 3 position.
Andres Alfonzo then took the first set on court two by defeating Alcala 6-4, 6-3, putting the Eagles up 2-1 in the match. However, the lead was short-lived as, as Eduardo Alfonzo lost to Ze Moya 7 at the No. 4 position.
The match continued to go back and forth with a Cerrini win at the No. 3 spot. Then with a win at No. 5 singles, Landert fell to Dani Casablancas 6-2, 4-6, 6-4, which put Ventura in the spotlight. Ventura gave FGCU the win with a 6-3 third set victory.
“The weekend provided more great experiences for us,” said head coach CJ Weber. “We need to continue to learn and grow each match, because we have the potential to be so much greater than we are now.”
The Eagles will travel to Tampa next for the USF Invite next weekend. Matches begin Saturday against Penn State and ends Sunday against UNC-Wilmington