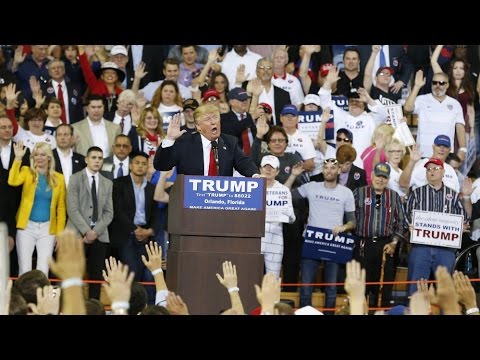 In numerous and iconic portraits from Nazi-era Germany, you may see shots of enormous crowds at rallies led by Adolf Hitler. Many of the Nazi supporters sported the familiar swastika armbands and, of course, flashed the outstretched salute that was the bane of Western Europe during WWII.
Now, taking a look at modern day, specifically at a rally for Donald Trump supporters in Orlando on March 5, there’s a similar image taking root, and it’s not benign.
At his Orlando rally, Trump asked a crowd of thousands to raise their right hand and take a vow to vote for him. Granted, in a normal election this might be overlooked as a confidence booster for a candidate, but judging by the fact that this is the reckless GOP frontrunner, this is not something that should be taken lightly.
“Who likes me in this room?” Trump said. “I’ve never done this before. Can I have a pledge?”
Trump then proceeded to lead a vow, where everyone in the arena repeated after him that they swore to vote for Trump no matter what. When you see this on video, it’s disturbingly dictatorial. Drones of, in my mind, clueless people are blinding leading this man and even solidly pledging the support he demands without a second thought. This man they’re supporting, mind you, supports forcing U.S. military troops to break the law and commit war crimes overseas according to his plans set out in the latest GOP debate.
Former CIA director Michael Hayden told Bill Maher in an interview that the military under a President Trump would not only have a right to refuse his orders but would be backed up by law in doing so.
“I would be incredibly concerned if a President Trump governed in a way that is consistent with the language candidate Trump expressed during the campaign,” Hayden said.
Trump reaches into those deep dark fears of his supporters, blaming our problems on immigrants, liberals and anyone who protests. Seriously, protesters. And, don’t forget that protesting is a right we have as citizens, but according to claims made by protesters booted out of Trump rallies, Secret Service have been cited, including this protester’s Facebook post, saying things like, “Those rights aren’t respected here.”
If conditions at a Trump rally are that malicious toward differing views, what can we expect from a Trump presidency? Are we facing a possible genocide of difference here like in the Holocaust? It may seem like an extreme example, but we need to wake up and see the connections. History repeats itself, but some history should stay in the past.