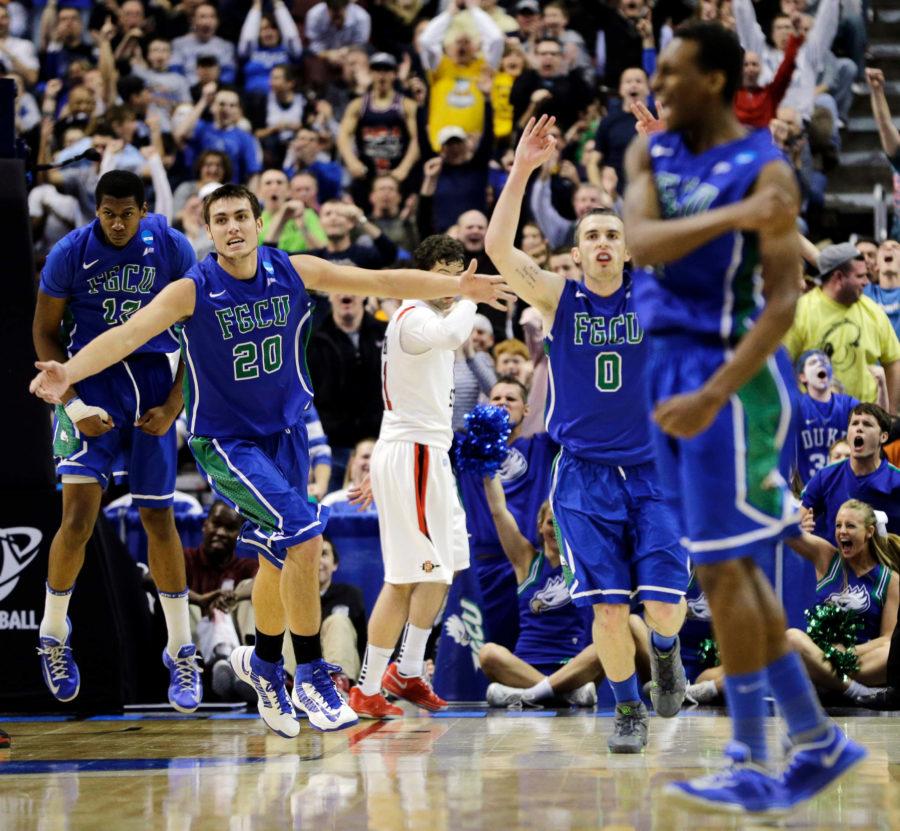 After shocking the world and defeating both No. 2 seed Georgetown and No. 7 seed San Diego State, FGCU is going to the Sweet 16 in just their first appearance in the NCAA tournament.

FGCU head coach Andy Enfield kept his comments short and sweet after the win against SDSU.

“We’re going to the Sweet 16,” Enfield said with a big grin.

And he has everything to be happy about.  Not only did his team became the seventh 15-seed to defeat a 2-seed but they became the first 15-seed to advance past the round of 32.

And they did it in style.

Alley-oops, crazy dunks and winning over the fans of Philly was the recipe for success for the Eagles. But it was the dunks that garnered the most national attention.

The most popular dunk came against Georgetown with 1:55 left in the game with FGCU up seven. Sophomore Brett Comer threw an alley-oop to junior Chase Fieler that got everyone off their seats and on FGCU’s team.

“I’ve got some crazy dudes on my team,” Enfield said.  “When he [Comer] threw that ball, I thought it was coming to me. I was like, ‘where is that going?’ I don’t know where that ball is going half the time, but it usually winds up in a guy’s hand and he’s either dunking or laying it in. I’m like ‘great pass Brett.’”

After the game, that was the talk, well, besides the upset of course. Everyone asked, “Why would Comer throw that pass? Georgetown was going to foul.”

“It was a little risky,” Enfield said. “But that’s our style. We have a lot of risk-reward with pushing the ball like this.”

The Philly faithful weren’t the only ones who got to see the high-flying action of FGCU.  About 50 students took a 23-hour bus ride up to Philadelphia to cheer on FGCU.

“Despite how long we were in the bus it was exciting the whole time,” FGCU freshman Jon Lupinacci said.

The students cut it close.  They got to the Wells Fargo Center at 6:15 p.m., just 35 minutes before tip-off. Lupinacci said they stopped a total of four times in the 23-hour drive:  Three to exchange bus drivers and one stop for food.

Although the original plan was to leave after the game, win or lose, Student Government president Peter Cuderman lobbied and figured out a way to stay.

“We had to stay,” Cuderman said.

Cuderman said that all the students had to do was pay for a ticket for Sunday’s game and that an FGCU booster had paid for the six hotel rooms required.

The students and the Philly faithful were not disappointed when FGCU faced off against No. 7 seeded SDSU.

“I don’t think it’s really sunk in to any of us yet,” said sophomore guard Brett Comer, who had a career high 14 assists against SDSU. “Right now we are on an emotional high it’s hard to come down from.”

After the game, the campus erupted in celebrations.  Many students gathered in North Lake and celebrated FGCU’s victory.  They stood on cars, did chants and were part of WINK News’ live broadcast.

Transfer Jamail Jones, who had to sit out a year due to NCAA transfer rules, was in the middle of the celebrations.

“I feel like a proud father right now,” Jones said. “I grind every day with this team, and I actually see it blossoming from the outside in, and it’s very exciting.”

On Monday, FGCU had a pep rally at Alico Arena in front of an estimated crowd of 2,500 students to celebrate the Sweet 16 birth. The pep rally was also aired live on ESPN in the prime TV spot, the 6 p.m. edition of SportsCenter.