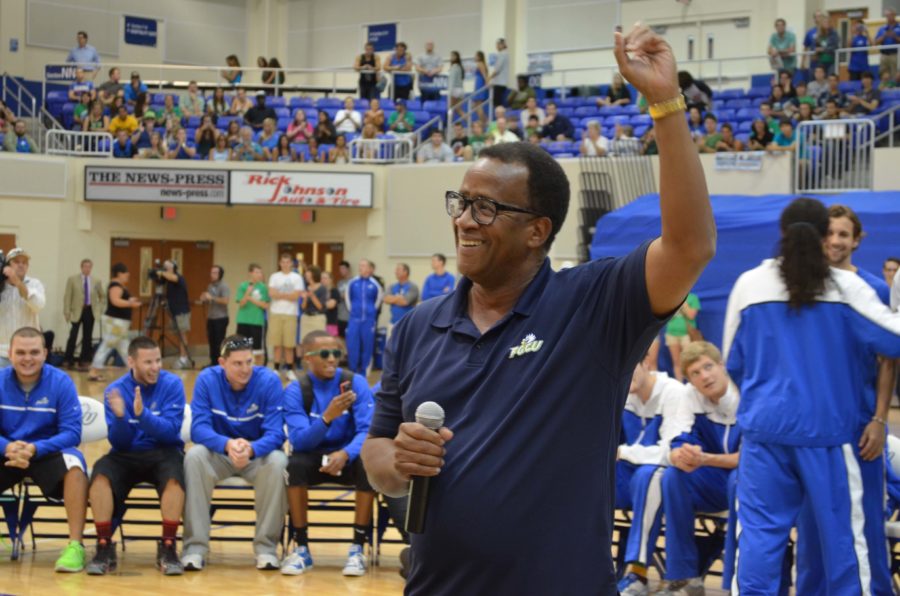 As of last Friday, the nation’s love affair with the Cinderella story of Florida Gulf Coast University basketball has been undeniable.

Ever since University President Wilson Bradshaw watched his Eagles soar past the competition, media requests for meetings have been pouring into the president’s office. Bradshaw and Vice President Susan Evans have worked well into the night to keep up with the immense number of requests.

While Bradshaw feels that the men’s basketball team isn’t FGCU’s only great accomplishment, he is proud of the national response to the team’s success.

“Well, I don’t know if I’d say it’s put us on the map,” Bradshaw said, “but it has greatly enhanced our visibility. I fully appreciate how much the success of the basketball team has brought FGCU into the minds of many people, and we’re very pleased about that.”

Through the midst of the exciting media frenzy, Bradshaw has proudly watched his school of nearly 14,000 students change from a quiet campus in Fort Myers, to the roaring heart of “Dunk City.”

“I talked to some folks in Fort Myers and they really like Fort Myers, at least during this period, being referred to as ‘Dunk City.’ I think it’s very cool,” Bradshaw said.

The men’s basketball team will now travel out of “Dunk City” to Arlington, Texas, to take on the University of Florida in the Sweet 16 of the NCAA. President Bradshaw is optimistic about this next matchup.

“I won’t give you any points spread on that, but I think that Florida Gulf Coast University will win that game,” Bradshaw said.

Monday, FGCU held a pep rally in Alico Arena for the team. As ESPN broadcast the rally live for the world, FGCU made its first misstep.

On national television the 2,500 fans in the stands began to chant, “F*** the Gators.” President Bradshaw attributes the slipup to the student body’s overwhelming level of excitement.

“I don’t think ESPN planned to show us in a bad light but I also think that the students, and all of us, need to be really careful we maintain a proper level of respect and stability as we are loud and proud of our Eagles,” Bradshaw said. “I think that it’s understandable that students are obviously very exuberant about the upcoming game and the success of our (basketball) program. I think it behooves us to be really make sure that exuberance expresses itself in a civil and respectful manner.”

Despite the embarrassment at the pep rally, the impact the NCAA has had on the school has been astronomical. While some ramifications will be determined in the coming years of FGCU, others are immediate and undeniable.

As lines snake around the shelves of the bookstore and the campus is overrun with visitors, the university has become an overnight sensation.

“Right now, it’s undeniable that it’s having great immediate impact,” Bradshaw said. “We’re seeing a huge increase in the number of hits on our website, both the general website and the athletics website, as well as a huge increase of sales in our bookstore. I think we’ll be able to better assess (the impact) after we finish the final four.”