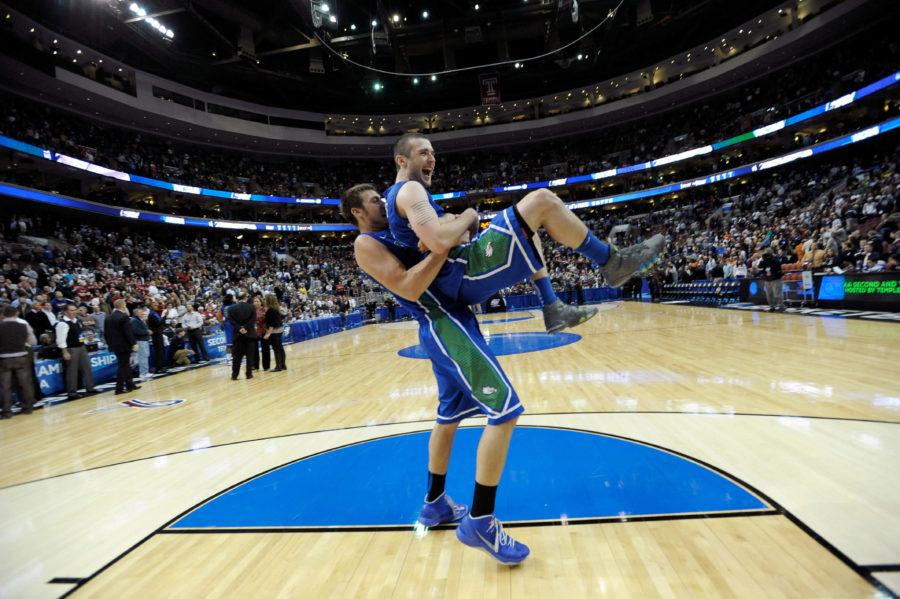 For the first time in NCAA history, a No. 15 seed has advanced to the Sweet 16.

In their challenging path to this righteous spot, FGCU handily defeated the No. 2 seed, Georgetown Hoyas, and the No. 7 seed, San Diego State University Aztecs. With a win of 81-72 against SDSU, the Eagles performance shocked many once again. A team that was considered the biggest bracket buster of the tournament turned into a Cinderella story in one game.

Sophomore student Brett Comer, number zero, expressed his feelings toward the recent victory: “Everyone was literally on an emotional high. We didn’t know how to react. We just sat there in shock because it really happened, it was an indescribable feeling.” Comer said.

Comer had 14 assists in Sunday’s game, which gave him twenty-four in the two NCAA games. The highlight of the game that had fans screaming in exhilaration came at the 8:50 mark of the first half when Comer drove into the lane and left a perfect lob for sophomore student Eric McKnight, who finished with a thunderous Tomahawk to complete the alley-oop. With the two huge upsets of the tournament, nobody would have ever thought that the swamplands of Southwest Florida would have its name changed to “Dunk City.”

Not only was the FGCU basketball team’s victory celebrated on campus, but it was also the number one trending topic on Twitter.

“Its great to see people we look up to like Lil’ Wayne, Plies, Skip Bayless and Lebron James tweeting to us and supporting us and saying they are on your side,” Comer said.

The adrenaline of all the FGCU students filled the local bars, restaurants and even the student dorms, causing chaos and steaming support for the team. Students are now planning on piling up in vans, splitting the gas cost, and driving 19 hours to Texas to show their school spirit against the University of Florida.

“It means a lot that people are driving to Texas, because we didn’t have a lot of the support that we have now and its nice to have everybody out there because it helps us play a lot better,” Comer said.

The coined phrase “we started from the bottom now we’re here” has blown up everywhere, turning into the basketball team’s theme song. Junior student Chase Fieler, who is a power forward, expressed his reactions toward the upcoming game.

He said: “Against Florida we want to look at it as any other game. We need to go out there and play with our own style that we have been playing with.”

After the big win on Sunday night, all the local students flooded outside of Building L in North Lake, which is where the team lives, to celebrate in the pouring rain, along with local news stations and even the University police.

Fieler said:“The whole experience is so surreal; it doesn’t feel real yet. It won’t sink in until we are back on the court. It’s really fun handling all the media coverage like ESPN and getting such acceptance from the nation.”

In honor of the successes of the team, FGCU held a massive pep rally at Alico Arena at 6:30 p.m. on Monday. Whether you are a basketball fan or not, FGCU is making history, and the small school everybody doubted has shown an extreme amount of perseverance proving to everyone that FGCU is here to stay. They will be taking on UF on Friday, March 29 at 9:57 p.m. in Cowboys Stadium in Arlington, Texas.

Without a doubt FGCU has now proven to the country that they are just as strong, dedicated and driven as any other team competing in the tournament. They are ready to take on whatever team is thrown their way. If the Eagles continue to play with the tenacity that they have been showing, the University of Florida should not be surprised at what they are about to bring.