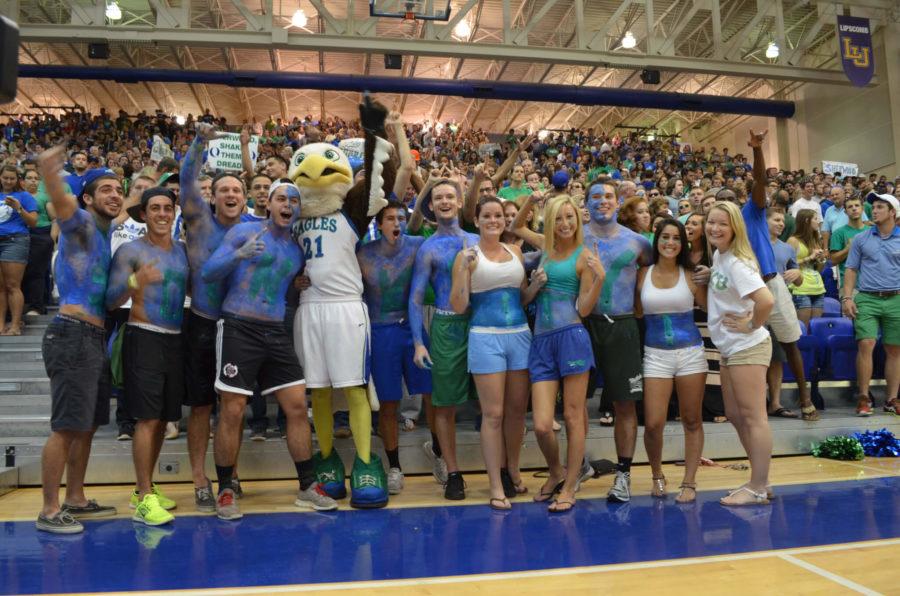 Blue and green shirts, shorts and tons of school spirit.

The event had students and fans of all ages shouting “FGCU” and Fort Myers’ now-famous nickname, “Dunk City.”

The packed arena was filled with approximately 2,500 supporters waiting to see the men’s team and to hear remarks from President Wilson Bradshaw and coach Andy Enfield.

Before either addressed the crowd, however, it was time for the pep rally’s stars to arrive.

The men’s basketball team emerged from a back staircase to screams of excitement and support. The team ran through the crowd throwing shirts, receiving hugs and giving high-fives. Homemade signs flew into the air, including one asking senior guard Sherwood Brown to “shake them dreads.”

It only got louder as the team members made their way down to the court and started to do their Dirty Bird dance around each other.

“I feel like it got the crowd pumped and created more school spirit along with getting everyone excited for the upcoming game,” said Meghan Moss-Solomon, a junior majoring in business management.

To start the festivities, Athletic Director Ken Kavanagh spoke to the fans and expressed his delight about all of the Eagles’ sports teams.

“We’re so proud of FGCU and to support all of our sports all year long,” Kavanagh said.

He also noted the limited number of tickets available to the Sweet 16 game and told spectators that tickets are selling quickly.

The crowds’ continual cheering and energy even got Bradshaw on his feet. Before addressing the crowd, Bradshaw jumped up and down on the court in excitement.

Bradshaw promised to make his remarks short because he knew the crowd wasn’t there to see him, he said.

Bradshaw also took that moment to recognize the crowd in Philadelphia that supported FGCU, even if they weren’t affiliated with the university.

“They were all Eagles,” Bradshaw said.

Bradshaw also made a request of the enthusiastic, but confused, crowd.

He then led the crowd into the cheer before finishing in unison, saying, “We are FGCU.”

When men’s basketball coach, Andy Enfield, was called to the microphone, the entire arena erupted in enthusiasm once more, and cameras began flashing.

Enfield addressed the crowd and thanked them for their support.

“Even though you weren’t (in Philadelphia), we could hear you,” Enfield said to the screaming fans. “We’re going to need to hear you from Dallas, Texas, Friday night.”

The Eagles will be taking on the Gators of the University of Florida on Friday in Arlington, Texas.

Enfield’s moment at the microphone was made even more memorable after FGCU students started to shout a colorful insult directed at the Gators. ESPN’s Sports Center anchors even apologized later to anyone who was offended by the live cut-in.

Several players then took the mic, including Brown and senior forward Eddie Murray.