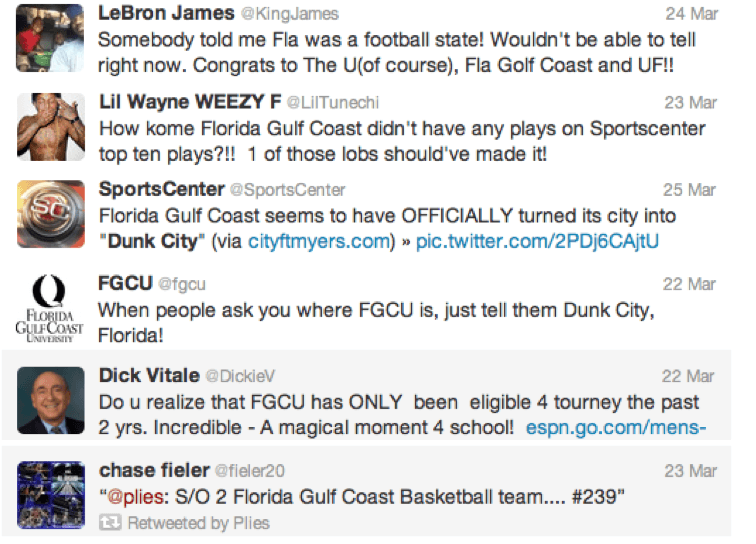 In a time when social media determines popularity, Florida Gulf Coast University has definitely been a trending topic.

During FGCU’s first tournament game against Georgetown, almost 369,000 tweets filled the cyber world, according to the NCAA’s Twitter pulse. That number exceeded the number of tweets about the University of Florida’s first game against Northwestern State, which only garnered 4,938 total tweets.

By Sunday’s game, the Eagles were trending again.

After Sunday’s victory, even some of Hollywood’s elite began to notice the newly appointed celebrities of Dunk City.

From Lil Wayne to LeBron James, Rob Lowe to Emmitt Smith, even celebrities couldn’t escape the NCAA’s Cinderella story of the small school in Fort Myers.

But the Twitterverse isn’t the only part of the Internet to go on Eagle overload.

“FGCU basketball” was still at 100 percent popularity as of Monday night, according to Google Trends.

Interest in FGCU has almost tripled since last month.

In February, FGCU’s popularity was at a mere 34 percent, according to Google Trends. The month of March has since increased FGCU’s interest by 66 percent.

Curiosity intensified after Friday night’s game, which made interest increase from 15 to 100 percent.

FGCU isn’t the only topic getting attention.

“FGCU coach wife,” referring to Andy Enfield’s wife, who was a supermodel, was also at 100 percent popularity as of Monday night.  Amanda Marcum has also been listed as a top news story on Yahoo.com.