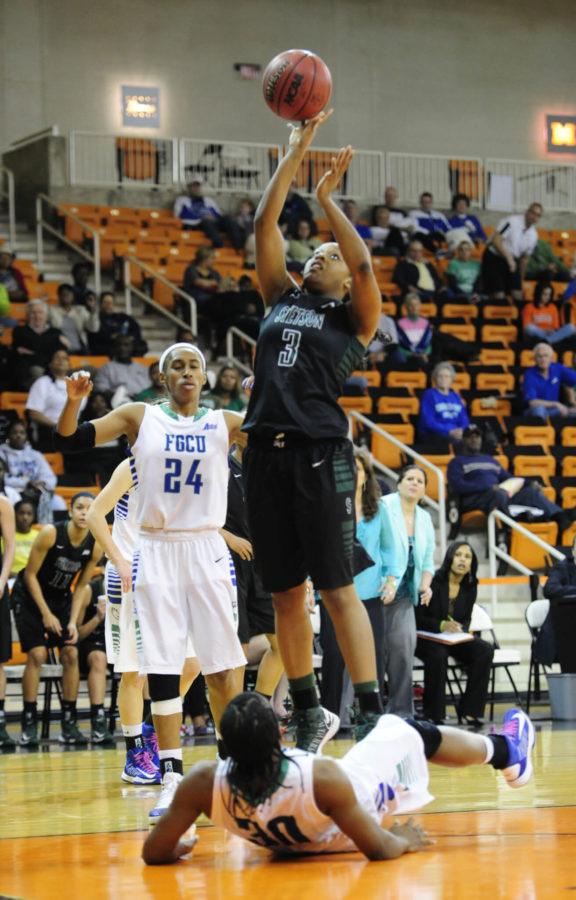 Look up the term “at-large bid” online and the first result is a bid or berth in a sporting tournament granted by invitation, not right.
After losing 70-64 to Stetson in the Atlantic Sun Conference championship game, the FGCU women’s basketball team must depend on an invite into the NCAA tournament.
FGCU women’s basketball head coach Karl Smesko stated his case for his girls saying, “We finished the season winning 21 of our last 22 games including a win vs. LSU. The average margin of victory in those games was more than 22 points per game.”
Coming into the A-Sun tournament, ESPN’s Charlie Crème had the Lady Eagles projected as a No.14 seed playing No. 3 seed Tennessee on their home court in Knoxville, Tenn. An updated ESPN Bracketology report that came out Monday afternoon has FGCU out of the tournament as the “first four out”.
“We need people on the committee to really look into us,” Smesko said in an interview with the Fort Myers News- Press. “Do they want to judge us by being the most banged-up and incorporating new players? Against South Carolina, we didn’t have two guards. Or do they want to look at us after Christmas when we beat LSU and ran through conference play with no game in single digits?”
The Lady Eagles would be the first team from the A-Sun to earn an at-large birth into the NCAA tournament.
“Such an accomplishment would not only be historic for
the A-Sun but establish full accreditation from our peers as to the strength of the tremendous program that Coach Smesko has built from scratch,” Kavanagh said.
“To receive an at-large selection in the tournament would show a great deal of respect for our program, and it would be a great day for our conference,” Smesko added. We have a team that can win NCAA tournament games. We hope we get the chance to represent the A-Sun and prove that we belong.”
The Eagles had won 41 consecutive A-Sun games overall until losing to Stetson in the A-Sun Conference Championship finale. FGCU’s 41 consecutive conference overall victories ranked as the second longest streak in the country, behind defending national champion Baylor (46).
The Eagles resume is strong enough to fit into the criteria needed for an at-large bid. FGCU ended the season 27-6 after riding an 21 game win streak, beginning on December 28 with a upset win over Southeastern Conference foe Louisiana State University, and annihilated A-Sun competition during the regular season outscoring opponents by 25.7 PPG. In their six losses the average RPI of opponents was 65, the highest being No. 17 South Carolina with an RPI of 18.
“Based on our performances, including beating the likes of LSU this year, losing to highly regarded DePaul by only 2 and without end of the year starter DyTiesha, and our current No. 51 RPI,” FGCU athletic director Ken Kavanagh said. “We also have well-earned credibility from our OT game against eventual Sweet 16 St. Bonaventure in last year’s
tournament, we definitely believe we are deserving of an at-large berth.”
If the Lady Eagles do not get an at-large bid into the NCAA tourney, the Lady Eagles have a Plan B coming in the form of the Women’s National Invitational Tournament (WNIT).
“There are going to be a lot of really good teams in the WNIT. The field may include the likes of Kansas, Ohio State, Florida, and Arkansas just to name a few,” Smesko said. “It is a prestigious tournament, and we have had great community support when we have hosted games in the WNIT.”
Kavanagh told Fort Myers News-Press Monday night that FGCU has placed a first-round bid of $15,845.70, compared to two years ago when FGCU submitted a first-round bid of $16,500.
Kavanagh added, “In the unfortunate event that we are not bestowed an at-large bid, we would certainly embrace an opportunity to once again host in the WNIT. This is an event that was extremely beneficial to us during our restricted transition years prior to our becoming fully eligible for the NCAA Tournament, and we owe a lot to the fact that we were able to gain invaluable experiences by participating and advancing in this post-season event over those years. Also, our great fans have demonstrated support for this event, which is not unimportant given the financials related to hosting.”
This would be the fifth time in program history that FGCU participates in the WNIT. The last time coming in 2011, when the Lady Eagles hosted and beat Drexel 73-67, before losing to in- state rival Florida Gators 74-69 in front of a sold out Alico Arena crowd of 4,543.
All the suspicion of whether or not the Eagles get an at-large bid will be settled Monday night. ESPN’s Women’s College Basketball Selection Show begins at 7 p.m.
Delete Image
Align Left
Align Center
Align Right
Align Left
Align Center
Delete Heading