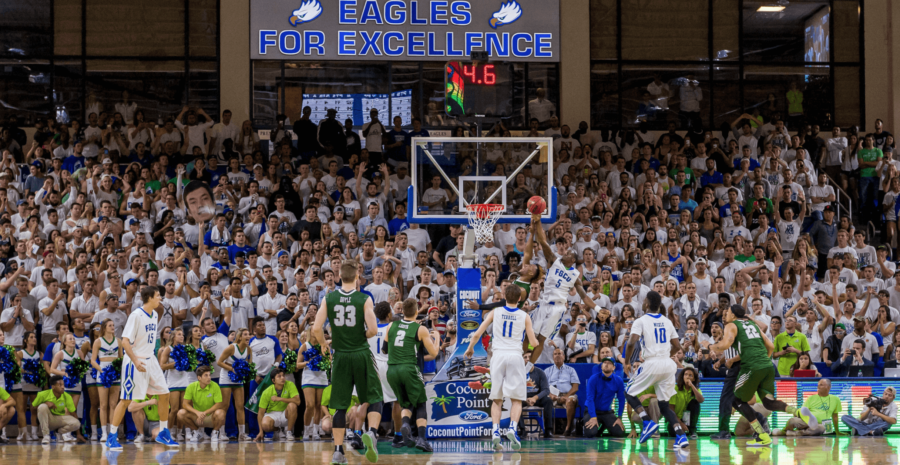 The 2016 NCAA Tournament will open with a match-up between FGCU and Fairleigh Dickinson University in Dayton, Ohio. The play-in game is for the No. 16 seed in the East bracket.
FGCU won the Atlantic Sun Conference Tournament Championship last Sunday to earn the league’s automatic berth into NCAA Tournament, while Fairleigh Dickinson won the Northeast Conference Tournament title.
The teams have never met and did not have any common opponents this season, making any predictions for the outcome foggy. A breakdown of the numbers doesn’t reveal any favorite either.
FGCU averages 77 points per game this year, compared to FDU’s 77.9. The Knights average 12.9 turnovers a game, while the Eagles average 12.3.
FDU went 18-14 this season and 11-7 in its conference. The team went 9-8 in away games.
FGCU went 20-13 on the season, racking up eight loses away from home.
The winner of tonight’s game will take on No. 1 UNC in Raleigh, North Carolina Thursday evening. Tonight’s game will be aired on truTV and tips off at 6:30 p.m.
This is FGCU’s second time in the NCAA Tournament after making its legendary Sweet Sixteen run in 2013, birthing Dunk City. FGCU has only been Division I postseason eligible since 2011-12 and this will be the Eagles’ fourth postseason appearance.
The Fairleigh Dickinson men’s basketball team is back in the NCAA Tournament for the first time since 2005. The Knights are 0-4 all-time in the NCAA Tournament.