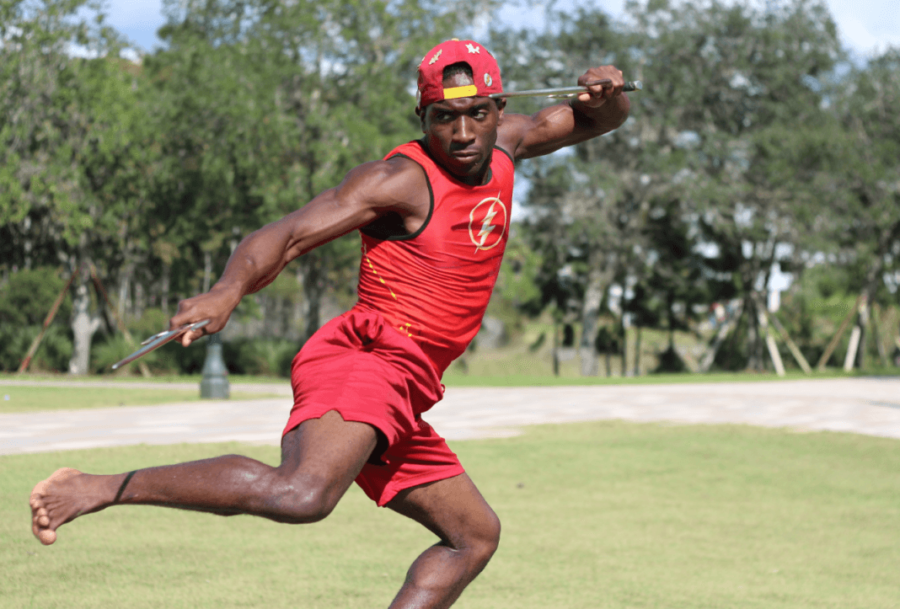 FGCU student Jordan Brown carries more weapons than books to school. This is because he has been training to become a ninja warrior since the spring of 2015. His ultimate goal was to participate in NBC’s American Ninja Warrior and after a long year, he feels confident he finally made that dream a reality.

ANW films more than 100 people running the course, then, they select just a few to air on TV.

Brown applied to run the course for the show last fall, but he never got the call from the casting crew this spring. Nevertheless, he continued pursuing his dream. Approximately three weeks ago, he found out that there would be a walk-on line in Atlanta, Georgia for people who weren’t cast initially. He heard the casting crew would select some individuals from the line and they would get to be filmed running the course.

The official walk-on line did not occur until March 14, but Brown found out there was an unofficial line and decided to join that one as soon as possible at the end of February.

“Once I found out there was four people on the line, the next day I went up there because I wanted to be on the top ten,” Brown said. “I heard the top ten would for sure run the course.”

He packed his nun chucks, bo staff, bow and arrow, sai, escrima sticks, throwing stars and throwing knives, and drove eight hours to Atlanta. He went to Grand Park, the location where the unofficial line took place, and managed to get his name on the seventh spot on the list. He then came back every day to the park at 10 a.m. and stayed there until 5 p.m. to keep that spot. He was later bumped to the sixth place, because someone was late.

“My parents helped me with the paying situation,” Brown said. “I basically camped out for three weeks. I met a lot of amazing people. It was actually pretty fun.”

Brown didn’t know all of the details about how the show managed the line, but he did know the higher on the list he could get, the better. He said the official walk-on line took place Monday, March 14.

The group who wanted to get the second chance camped outside the official location of the walk-on line 24 hours before that Monday. Then, that day, the casting director chose 30 people to participate in the official taping, which would take place Friday, March 18.

However, only fifteen people got to run the course from the 30 selected. On Friday, all of the competitors selected from the application process were filmed running the course first, and then the people from the walk-on line. There wasn’t enough time for all of the 30 to run it.

“Once it hit crack of dawn they stopped,” Brown said.

Although Brown can’t say how he did when he ran the course until the show airs June 1, he did say he was one of the ones who was filmed.

“I had to do a lot of sacrifices,” Brown said, “but it was all worth it having the opportunity to run the course.”

Brown said approximately 130 people were filmed Friday night. Not everybody will be on TV this summer.

“I guess they pick whoever has an interesting story and also whoever did best,” Brown said. “If you seem to be funny on the course, you’ll probably air. They just want to get viewers and whatnot.”

Jeffrey Harvey, an FGCU alum, was the person who told Brown about the walk-on lines. He has also been pursuing the dream of participating in ANW for a year and a half. now

“It started out slowly,” Harvey said. “I didn’t have equipment. I didn’t have obstacles. And about the last year or so I started building a lot of obstacles in a warehouse that my family has. That’s where I primarily train now, and Jordan Brown trains there with me, too.”

Harvey went to Atlanta, as well.

“It was an awesome experience,” Harvey said. “It was fun to find people who have that same interest, because it’s really hard to find people like that here in Fort Myers.”

Both Harvey and Brown said they met interesting people in Atlanta.

“It was very stressful but in the end I’m glad I didn’t get the call because I would have not been able to experience the relationships with the men and women that were there,” Brown said.

Regardless of if he makes it on air or not this summer, Brown wants to go through the entire process of applying for the show next year, as well. He said he believes it doesn’t really matter how, but that it happened at all.

“It wasn’t the destination, but the journey,” Brown said. “I want to thank God for that journey.”

One of Brown’s other dreams is that FGCU builds a ninja warrior lounge on campus. He has been working on a petition to add it to the new Student Academic Health and Life Fitness Center that FGCU has lined up. He has been collecting signatures on a petition, and has approximately 1,000 signatures already. Brown said he plans to submit the petition to the university soon, and if it is rejected, he said he’ll get more signatures.