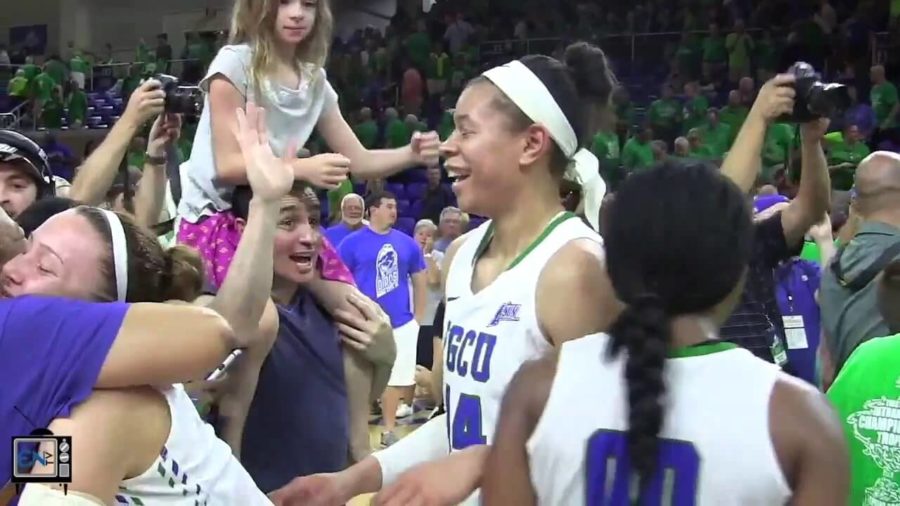 They’re going to the ship.
The FGCU women’s basketball program made history Thursday night in front of a program-record 4,633 fans at Alico Arena.
FGCU beat Michigan 71-64 and will be advancing to the WNIT championship against the University of South Dakota on Saturday.
“We’re just excited that we get to play for the WNIT championship,” FGCU head coach Karl Smesko said.
Thursday night’s nine-point win is the first time in the tournament that FGCU has not taken a double-digit victory.
“I thought we played a really good basketball team,” Michigan head coach Kim Barnes Arico said. “They did what they needed to do down the stretch.”
FGCU opened the game with a three-pointer, foreshadowing what the arena was about to witness. Michigan answered the original three-pointer with a 9-0 run, bringing the score to 9-3 at 4:54 in the first quarter. This was Michigan’s largest lead of the night.
Then, FGCU found its first run of the night, drilling three consecutive three-pointers to take back the lead, 12-9. By the end of the first quarter, FGCU led Michigan 16-11.
The pattern continued; the teams took turns making runs. At the half, the score was 28-22, and FGCU was in the lead.
Each time Michigan took the lead, FGCU would earn it back in seconds.
Michigan ran a press in an attempt to stop FGCU. This worked a few times before FGCU figured out just how to break it, leaving it useless for Michigan by the fourth quarter.
When the clock hit two minutes, every FGCU fan in Alico was on their feet and cheering. With 46 seconds to go in the game, FGCU held a five-point lead. Event staff beefed up around the student section, reminding students that they were not permitted to rush the court.
The next 46 seconds of game time lasted several minutes, as Michigan resorted to fouling, hoping to rebound off FGCU’s missed layups and earn extra possessions.
FGCU shot 75 percent from the free-throw line in the second half. In those few seconds of play time, the Eagles turned a five-point lead into a nine-point lead.
The program has never made a tournament run like this, and Alico Arena had never seen a sold-out crowd at a women’s basketball game.
Smesko described the crowd as “exceptional.”
“There’s a lot of great basketball fans in Southwest Florida, and we’re more than appreciative,” Smesko said. “It was a huge advantage for us, having it here.”
The FGCU players channeled the crowd’s energy and expressed their gratitude after the game.
“They give us energy,” FGCU senior guard Kaneisha Atwater said. “It was so loud I couldn’t even hear. I didn’t hear the crowd; that’s how loud it was.”
Alico Arena was standing-room only for the first time in the program’s history.
“(The crowd) helped us a lot,” senior Stephanie Haas said. “A lot of them have been here throughout the whole season.”
Haas had her first 20-point game of the season Thursday night. Haas, combined with Atwater and senior forward Whitney Knight, accounted for 55 of FGCU’s 71 points Thursday night.
FGCU will travel to Vermillion, South Dakota to face the University of South Dakota in the WNIT championship.
The Eagles are set to leave at 5:45 a.m. Friday morning, a quick turnaround from Thursday night’s game.