FGCU loses fourth-straight game against No. 3 Miami at Hammond Stadium 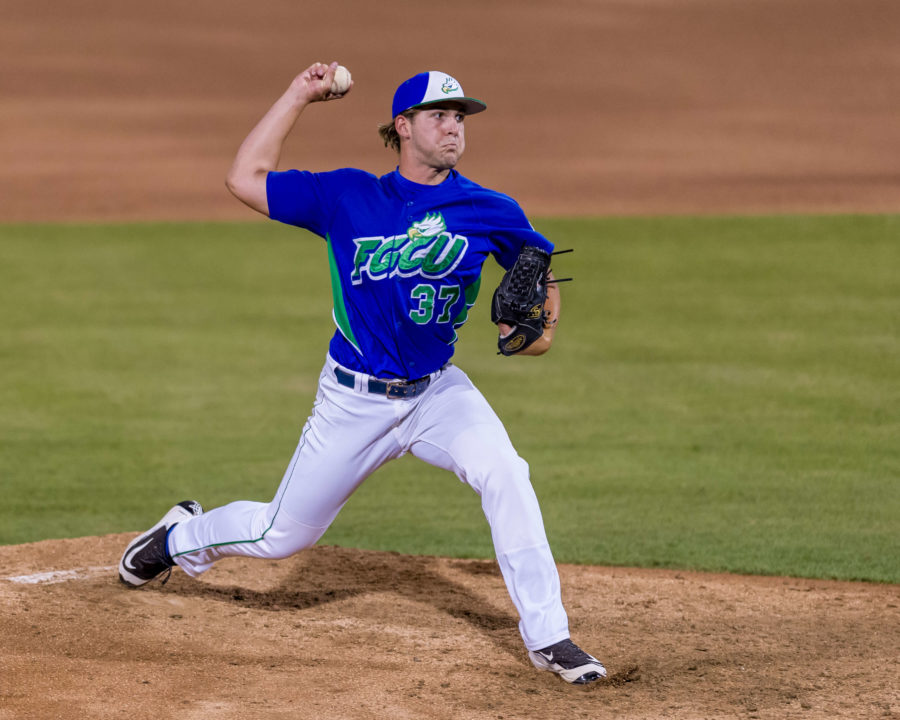 After getting swept in a three-game series against Evansville over the weekend, the FGCU baseball team welcomed No. 3 Miami at Hammond Stadium on Tuesday night. The nationally ranked Hurricanes defeated the Eagles 4-0 behind dominant pitching by Jesse Lepore.
After a scoreless, five inning pitching duel between Mario Leon and Lepore, the Hurricanes found a breakthrough in the sixth inning, scoring three runs thanks to three RBI singles.
“We didn’t hit the ball well,” FGCU head coach Dave Tollett said. “We had three hits, but we had five line drive outs. It feels like we are kind of snaked in right now.”
Mario Leon, 2-2, had an impressive showing against the Hurricanes’ batters, pitching 5.1 innings, striking out five batters and allowing four hits, two runs and walking two batters.
Jesse Lepore, 4-0, dominated the Eagles’ batters with ease, pitching seven shutout innings, allowing only two hits and striking out seven batters.
“The kid’s good,” said Tollett. “I think we helped him, and he gave us some advantage counts — 2-0, 3-1 — that we didn’t take advantage of, and he got some cheap outs on 2-0 and 3-1 counts.”
The Eagles finished the game with just three hits, with two of the three coming from Matt Reardon, and left five runners stranded on base.
The story of the first five innings in the contest was dominant pitching for both teams.
The pitchers traded 1-2-3 innings, with Leon retiring six consecutive batters at one point in the game. Throughout the first five innings, both pitchers struck out a combined 10 batters, and the teams left a combined six runners stranded on base.
In the top of the six, the scoreboard finally read another number rather than zero.
After Leon walked the first batter of the inning, Leon hit the second batter he faced, ending his night in the sixth inning.
“When I hit Heyward, I let my arm drag, and I didn’t stay behind,” Leon said. “I wouldn’t say I was tired. I could have kept going, but it was definitely the right call to put Sterling (Koerner) in. He’s probably our best out of the bullpen.”
Tollett handed the ball over to Koerner with runners on first and second, as Koerner went to work to get the Eagles out of the inning.
Both runners on base took off to steal the bases in front of them before Koerner delivered a pitch. But, his pitch was met by the metal barrel of Johnny Ruiz’s bat, as he hit a line drive into right field, scoring Zach Collins to give the Hurricanes a 1-0 lead with runners on the corners.
The very next at bat, Brandon Lopez, doubled the Hurricanes’ lead, bringing in Jacob Heyward in to score from third with an RBI single and advancing Ruiz to second.
Following Lopez’s RBI single, Willie Abreu stepped up to the plate for Miami with two runners on base. Abreu grounded out into a fielder’s choice, as the Eagles were unable to turn two, getting only Lopez out on second. Abreu’s grounder moved Heyward 90 feet closer to home, as the Hurricanes now had runners on first and third.
With runners on the corners, Edgar Michelangeli increased Miami’s lead to three, bringing Heyward around to score with an RBI single up the middle.
After a rough top of the sixth, Koerner struck out Randy Batista to end a dismal inning.
The Eagles looked for a response after a leadoff single by Matt Reardon in the bottom of the sixth, but their struggles against Lepore continued, going three up three down in the seventh inning.
In the top of the eighth, Miami added to its lead, scoring a fourth time, thanks to Ruiz’s second RBI of the game. With Heyward on third, he made a break for home, as Ruiz laid a slow bunt down the first base line, scoring Heyward. Ruiz reached first safely due to an overthrown ball to first by FGCU catcher Matt Roberts, and the Hurricanes led 4-0 going into the bottom of the eighth.
FGCU’s struggles at the plate continued in the final two innings, failing to generate any type of hits or runs, as they fell to the Hurricanes 4-0.
Now on a five-game losing streak, the Eagles open up Atlantic Sun Conference play on Friday, April 8 with game one of a three-game series against Stetson at Swanson Stadium.
“We still have to find ourselves,” Tollett said. “There are some holes in our lineup that we need to patch up or at least be able to have quality and productive at bats.”