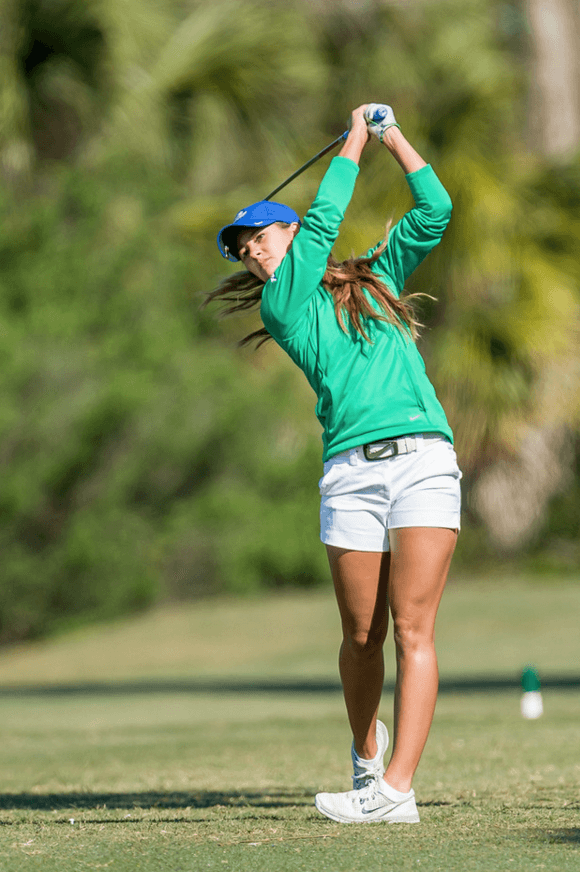 The FGCU women’s golf team earned a program-best second-place finish Tuesday, April 12 at the 2016 A-Sun Conference Championship. The Eagles fired a 308 in the third round at Reunion Resort and finished the three-day tournament with a team score of 901, ahead of five of the league’s seven teams overall.

FGCU finished play just 11 strokes behind conference champion North Florida’s 890 and held on, to edge defending champion Kennesaw State’s final score of 904.
The second-place finish is an improvement from last year’s third-place standing, which previously served as the team’s best postseason performance.
“Today was a tough day for the entire field,” head coach Sarah Trew said. “We definitely felt some nerves at the start of the day. It was not our best performance, but we kept our heads in the game to finish strong. I am so proud of our grit this week and can’t wait to be in a position to win again with even more experience under our belts.”
The Eagles finished Sunday’s first round in third place and used the program’s best-ever 290 score to catapult into second after two rounds.
“This year, overall, has been one of the best in program history,” Trew said. “We broke our overall scoring record as a team this year, posted our lowest 18-hole round yesterday and had our best conference finish this week. I’d like to thank Sara (Detlefsen) and Myka (Mei Khuan Yong) for everything they’ve done for this team for the last four years. They have been great representatives of FGCU and really model Eagle student athletes. Myka and Sara are my first recruits to graduate, which has been really special for me as a coach. I wish them the best in the future and am certain they will go on to do big things.”