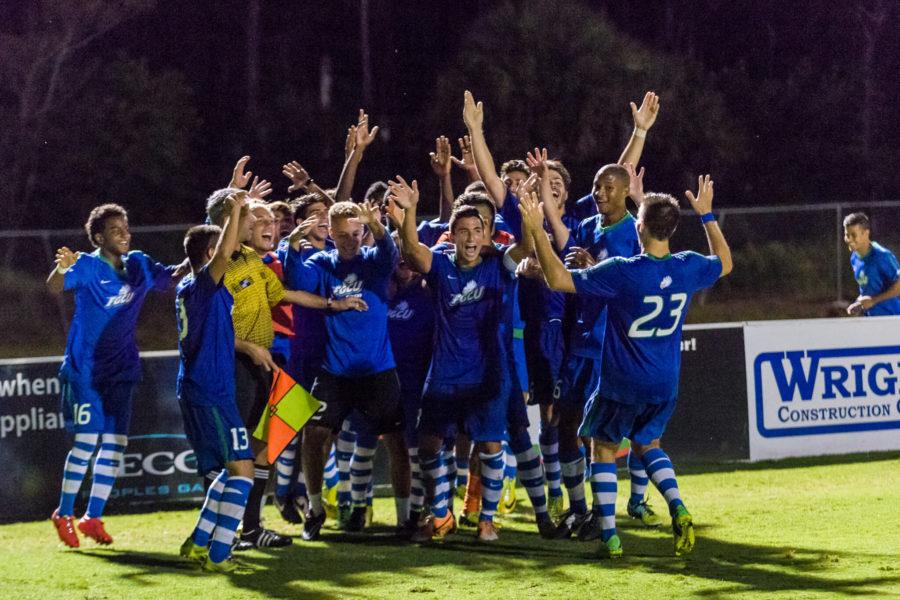 First goal of the game for #9 Felipe DeSousa

After a 2015 campaign that saw the FGCU men’s soccer team lose seven seniors and win its sixth consecutive Atlantic Sun Conference regular-season title, the Eagles welcome 10 new recruits to the team as they look to continue building a program that has made a lot of noise in the offseason.

FGCU reached new heights this offseason when Rodrigo Saravia, Nathan Ingham and Aaron Guillen all signed professional contracts to further their careers on the pitch.

“I think it’s a very, very talented class. I think trying to replace seven seniors will be very difficult, chemistry-wise, but as far as talent goes, I think every one of those players that we brought in has a chance to make an immediate contribution, whether it’s with character or work ethic. But, they are definitely some top-level recruits.

“We were fortunate to get a look at some players in places we didn’t expect,” Butehorn said. “We went to France this year, and the kid from Cyprus (Paris Psaltis) — we had a video that came through. And, he sent us a whole bunch of full game, and we really saw enough from the full games. Assistant coach Joe Dincecco had a contact with a representative in Japan that put us on to Jiro (Barriga Toyama), so it just came from a little bit of hard work and some connections.”

Joining the Eagles in the attacking third are Shak Adams, Alex Alexis and Jiro Barriga Toyama.

A product of South Kent School, Alexis was a member of the eastern team in the High-School All-American games after leading South Kent to an undefeated season.

Toyama, a junior transfer from Barton Community College, is the only transfer joining the Eagles this fall. Before sustaining a season-ending injury his sophomore year, the Chiba, Japan native scored four goals and dished out nine assists, earning him 14 points in just nine games.

Joining FGCU with hopes to bolster the midfield are Jahan Rajaee and Dante Longo.

Rajaee, is a teammate of fellow FGCU commit TC Anderson; they both played for Bucholz High School. The Gainesville, Florida native is already enrolled at FGCU and has already made his debut for the Eagles in their recent exhibition game against NYCFC.

Coming together with hopes to join a strong defensive backline for the Eagles are TC Anderson, Paris Psaltis and Thomas Delplace.

Anderson, a center back product of Bucholz High School, started 14 games for the Bobcats and scored three goals his senior year. The Gainesville, Florida native was a member of the Florida and Region III ODP team.

Psaltis, a right back from Nicosia, Cyprus is a two-time champion with his club team U-21 APOEL FC. For the past two seasons, Psaltis has competed in the U-19 UEFA Champions League.

Delplace, a center back product of Toulouse Football club, has participated in U-16 and U-19 camps for the French national team.

Joining FGCU with ambitions to become the Eagles’ new No. 1 are Gustavo Vasconcelos and Jared Brown.

A Recife, Brazil native, Vasconcelos is a product of BWFA and Santa Cruz Futebol Clube. The Brazilian has also trained with MLS side Orlando City.

With this being only the first wave of recruits coming in for Butehorn’s side, a lot of work still has to be done on the pitch, as the new recruits and current players have to fight for a spot on the 28-man fall roster.

“We always bring in guys and make sure that the roster stays at a certain number,” Butehorn said. “Guys know coming in that that’s a part of what they’re going to have to do in — that’s one, make the roster, and two, then try to make the travel roster and three, make the starting lineup. We have guys that have played and have done well here, but they have to make sure they maintain their status on the team.”