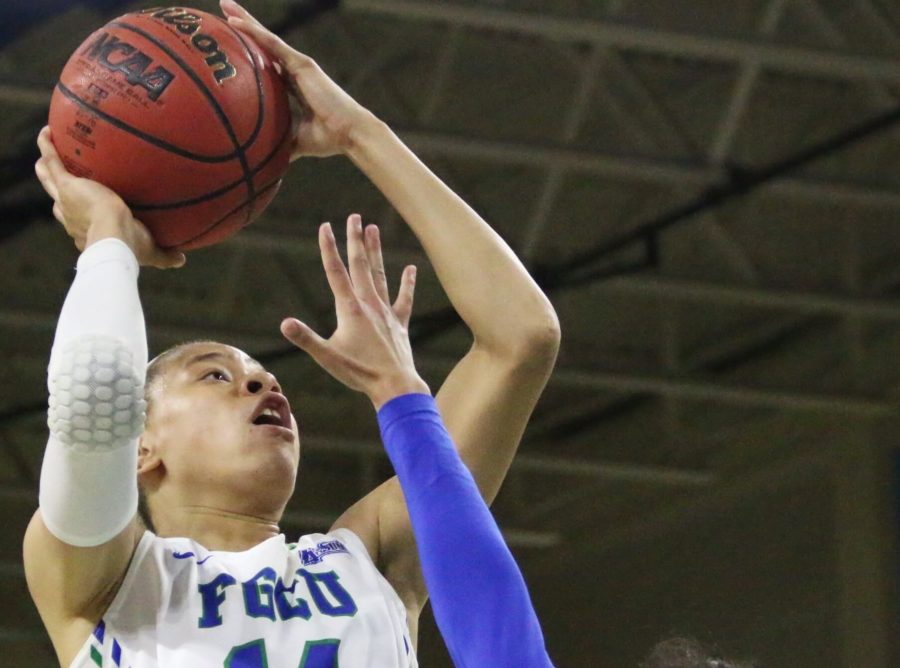 Time is ticking and the day is getting closer. The WNBA draft, just days away, has the potential to put the first FGCU player in the country’s women’s professional basketball league.

“I’m getting pretty anxious,” said FGCU senior guard Whitney Knight. “I’m excited but I’m anxious because I’m so close to realizing if I get drafted or not, which is pretty much what I’ve been working toward my whole life.”

The two-time Atlantic Sun Conference Player of the Year is expected to go sometime in the second round, according to numerous reports from a WNBA draft conference call last week.

During the season, WNBA team scouts from the Atlanta Dream, Los Angeles Sparks and even reigning WNBA champion Minnesota Lynx made their way down to Southwest Florida to get a glimpse at the 6-foot-3-inch guard that set both the conference and program record in blocks this season.

Knight said that her agency, Disrupt the Game, has talked to a few teams that have shown interest. But Knight has only personally talked to coaches from the Dallas Wings — previously known as the Tulsa Shock last season. According to Knight, all the teams that have reached out have shown strong interest, but the unpredictability of other teams’ selections can’t provide guaranteed answers.

“We’ll see what happens, I guess,” Knight said. “A lot of teams expressed interest in me and told me that they find me intriguing as a player, but you never know what’s going to happen.”

Knight joins 49 other top collegiate players entering the 2016 WNBA draft. Knight comes from one of the only mid-major programs represented on the list of prospects.

“I’ll just have to prove myself, like I’ve done previously, ” Knight said. “You just have to keep that positive attitude and say, ‘You know, I’ve worked hard for this opportunity and I deserve to be here.’ I just have to go out there and show everybody.”

As a young mid-major, FGCU has had to prove itself time and time again.

Despite being a top-100 recruit — who was seeing offers from schools like Duke, North Carolina and West Virginia — Knight believes that participating in the USA Basketball Team Trials last summer was when she needed to prove herself the most.

“I felt like that I showed that I deserved to be there,” Knight said, who ultimately was not chosen to be on one of the teams that would play in the 2015 Pan American Games and the World University Games.

“Kids that go to mid-major schools get overlooked,” Knight said. “They think that we’re not as good as the kids that go to the big-conference schools. Even though I didn’t make the team, I think that I showed that I was supposed to be there and played at the same level that everyone else did.”

Struggling to prove herself with a mid-major on the front of her jersey instead of an ACC or Big 12 team, Knight experienced a similar situation prior to her college career while moving up in the Amateur Athletic Union.

“I remember when I decided to move from my local AAU team; they told me that I ‘wasn’t going to play,’ and ‘those kids are too good,’ and that I just wasn’t going to be successful,” Knight said. “I ended up being successful; my recruitment ratings actually went up.”

Of those players selected in the three-round, 12-team WNBA draft on Thursday, 36 players  — only about a third selected — usually make team rosters as rookies. Knight, an Associated Press All-American honorable mention, says that she’d be fine with playing overseas before trying again in the WNBA.

“International is definitely an option,” Knight said. “It was an option no matter what. I think it would be an awesome opportunity to go to another country and play basketball.”

Knight won’t be the only one for FGCU to boast about sending to the WNBA. FGCU assistant coach Nicki Collen, who joined the program two years ago, accepted an assistant coach position with the Connecticut Sun just last week. During Collen’s two years under FGCU head coach Karl Smesko, FGCU earned its first-ever NCAA win and reached the WNIT championship game, collecting at least 30 wins each season.

Collen’s recent career move creates potential for a reunion of coach and player on a bigger basketball stage.

“We’ll just have to see what happens,” Knight said. “That’d be great if that happened, because she’s an awesome coach. ”

During her time at FGCU — in addition to her back-to-back player of the year honors — Knight led the conference in steals despite missing eight games early in the season due to a foot fracture. Last season, Knight was the nation’s only player to lead a conference in both blocks and 3-pointers made.

Knight chose FGCU over powerhouse schools for the opportunity to make her mark on a growing program.

“I just wanted to do something that nobody else had done,” Knight said, mentioning Elena Delle Donne, a Chicago small forward who left UConn for the University of Delaware, and Golden State headliner Stephen Curry opting for smaller mid-majors in college.

“I realised that if I wanted to be as successful as I wanted to be,” Knight said, “that I had to do things different than everyone else did.”

If Knight is selected to a team on Thursday, she will do something no one else has ever done at FGCU.

The WNBA draft will be on Thursday, April 14, at Mohegan Sun in Uncasville, Connecticut. The first round will be aired live on ESPN2 at 7 p.m., followed by the second and third rounds aired on ESPNU