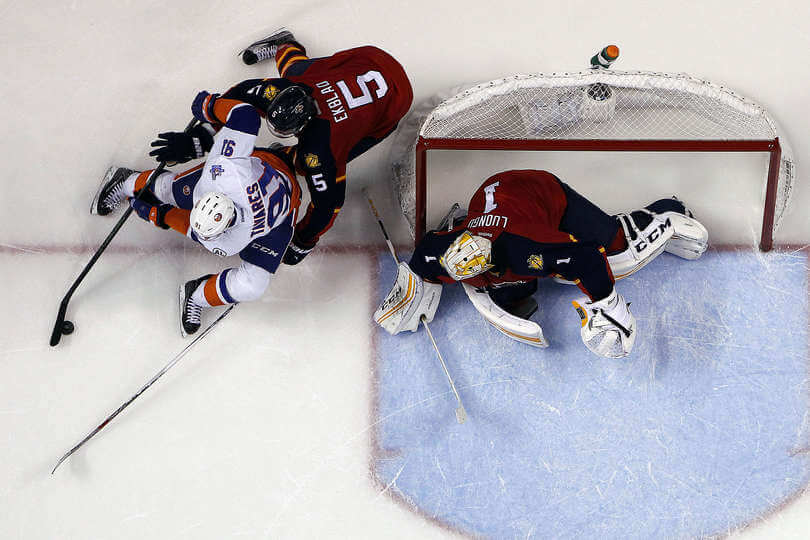 Florida Panthers goaltender Roberto Luongo and defenseman Aaron Ekblad defend the net from New York Islander John Tavares — all of which hail from Canada — at the Nov. 27, 2015 game in Sunrise, Florida. The Panthers got the victory after a historic nine-shooter shootout, ending the game 3-2. (Photo Special to Eagle News)

For the first time in a long time, Canada was shut out of the NHL playoffs. And, you read that right; this has happened before.

In the 1969-70 NHL season, two years before Hall of Famer Jaromir Jagr was born, the Montreal Canadiens failed to defend their prior year’s title, or even get the chance to do so, losing to Chicago 10-2 and thus their potential spot in the playoffs.

That year, the only other Canadian team at the time, the Toronto Maple Leafs, also failed to clinch a playoff berth.

Now, with seven of the 30 teams in the league hailing from Canada, not a single Canadian team made it to this season’s playoffs. Simple probability or the fact that five of the seven teams clinched last season makes it especially shocking to most hockey fans.

While some, such as the Vancouver Canucks, misplaced their faith in a young roster, others simply couldn’t overcome the loss of key players, such as the Montreal Canadiens losing goaltender Carey Price to a knee injury early in the season.

There are larger factors at play, however. Since April 2015, the Canadian dollar has dropped in value from 80 cents per one U.S. dollar to 68 cents at its lowest.

According to Forbes’ annual NHL franchise valuations, six of the seven Canadian teams have dipped in the last fiscal year.

Others point fingers at the fact that many talented players would much rather play in warmer weather as the true culprit here. They may not be wrong.

Surprisingly, the NHL team with the most Canadian representation can be found

south of the border, as south as one can get really, on the Florida Panthers, which are fittingly housed in Sunrise, Florida. The team is comprised of 22 Canadians on its 33-player roster, including fan favorite defenseman Aaron Ekblad and goaltender Roberto Luongo.

The Panthers aren’t the only ones representing our northern neighbor though. The New York Islanders and St. Louis Blues are tied for second with 19 Canadian players each, making the first round Panthers vs. Islanders playoff series the most dominant Canadian matchup of the eight opening series.

With Canadians still making up 49.3 percent of the NHL, every team in the league ranks in the double digits when it comes to Canadian representation — all but the Detroit Red Wings, which falls short at nine.

Perhaps the proportion of Canadian players illuminates not the fact that Canada has been shutout of the playoffs but that they indeed have not been. Canada, in its stereotypical friendliness, has simply learned to spread its representatives across borders.