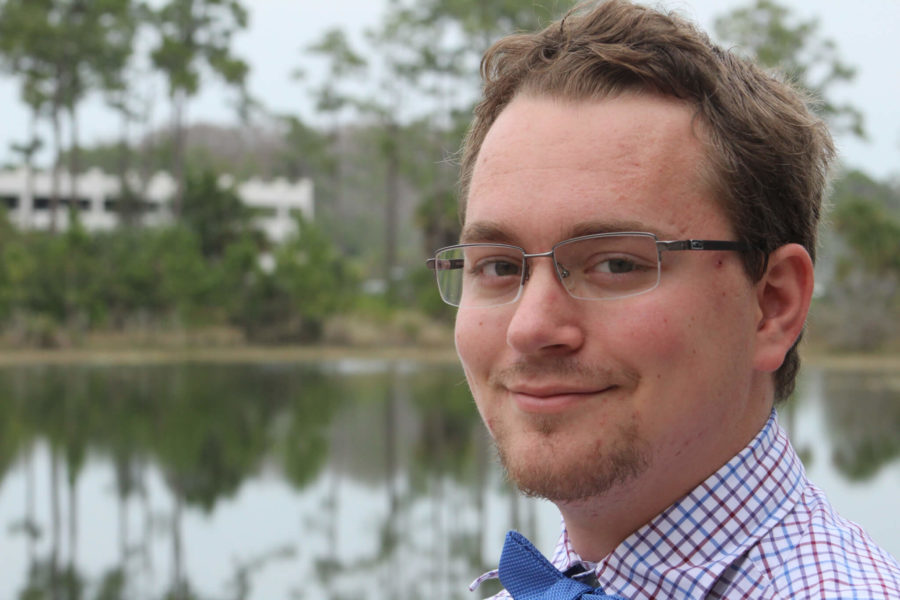 King will run for the Lee County Board of Education in District 2, where Jeanne Dozier sits. He plans to either get 842 signatures or pay a processing fee of approximately $1,600 to get his name on the ballot. (EN Photo/Georgette French)

Alexander King is an ambitious FGCU sophomore and chemistry major whose hobbies include drawing and traveling. He is also the youngest running candidate for the Lee County Board of Education this year.

King, 21, is running for a position on the Lee County Board of Education in District 2 where Jeanne Dozier sits.

“She’s been on the board for 16 years, as long as I’ve been in school,” King said about why he decided to run against her, “It’s the right time. People also tell me that I’m a good leader so I’d be great at it.”

For King to be successful in his run, he has to either get 842 signatures or pay a processing fee of approximately $1,600 — and that is just to get his name on the ballot.

King is involved in the Eagle Scouts and has been involved in the Youth & Government Club, which shows kids how the political process works, but this is his first time running in an election.

“I’m the person who decides to run a marathon before (running) a three mile,” said King, who remains optimistic about his experience. “I’ve been thinking about running (for the board) since my senior year in high school, but I missed the election. So I’m running now.”

As the youngest candidate, King has a lot of challenges to face but he said that one of the biggest challenges is getting heard.

“I could be proposing a great idea, but people will glance over me because they think I don’t know what I’m doing,” King said, “There’s that, and respect.”

Then there are the voters, many of whom King hopes will be students.

“Something I learned is that students are so apathetic,” King said. “They don’t care about politics. They’re just like, ‘who cares, nothing is going to change.’”

But King wants to prove that things will change. He said that one of his goals is to be an advocate for students who are currently in the school system and bring new ideas to the board, but he can’t do that unless students vote.

“I want to emphasize that these things will directly affect them, ‘cause if there’s one thing people care about, it’s themselves,” King said.

“Students do care and know that elections will affect them but it’s all about when, when will it will affect them, and how,” said Stacy Demmings, 45, Lee County resident and mother of two, “And with something like this, I think parents will vote more. These are our kids and their future and I would vote for who I think will do best for them.”

“I don’t think that age really matters but it is all about the experience,” says Demmings. “You can have great ideas and want to do something, but you also have to know how it’s going to get done.”

King has been going door-to-door as well as collecting signatures in front of stores and at local precinct polling locations which has gotten him 80 of the 842 signatures that he needs.

He’s hoping he can get enough signatures for the ballot, but he knows it won’t be easy.

“I’m running a hard race, but if I don’t win, I still want to be involved by working with people on the board,” King said. “I’m serious about change and I know people have heard that a billion times, but if I base it off whether I win or not, then I don’t really want change.”

According to Cheryl Futch, Lee County Board of  Elections spokeswoman, candidates have until May 24 to gather their petitions before early voting begins. Voting for the Lee County School Board elections is based on the school districts and only people living in each district can vote for respective runners.

Election day is Aug. 30 of this year.