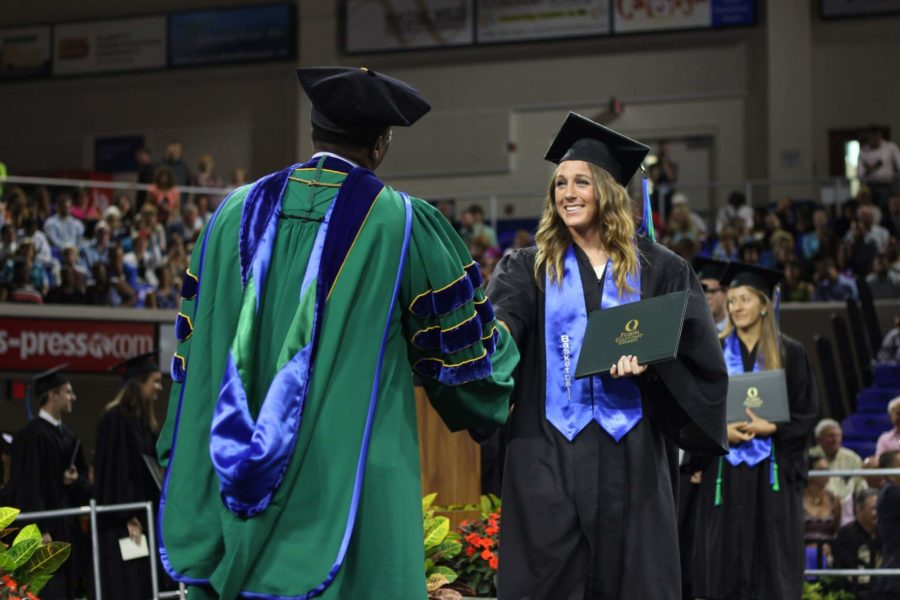 Jenna Cobb shakes President Wilson Bradshaw’s hand as she gets her degree in the spring 2015 commencement ceremony. Students will have four more degrees to choose from starting fall 2016. (EN Photo/ Kelli Krebs)

The FGCU Board of Trustees met in the Cohen Center ballroom to discuss several topics including four new degree programs that will be available to students by fall 2016.
According to the Board of Trustees’ amended agenda, two of the new programs include a bachelor’s in forensic science and a bachelor’s in public health.
The forensic science program, a major only offered at two other Florida universities, is designed to focus on meeting accreditation standards while opening the door for graduates to be employed with the government and private crime laboratories. It has also been identified by the Florida Board of Governors as a Science, Technology, Engineering and Math program.
It expects to have 30 students enrolled within the first year and around 150 students, by the fifth year while enabling an average salary of $52,000 to students post-graduation. As of this year, the only Florida schools that offer this major are UCF and University of Tampa.
The public health program will focus on environmental health, epidemiology and gerontology. It will also give students career opportunities in public health and clinical settings. The program, upon approval, will be identified by the Florida Board of Governors as an Area of Strategic Emphasis in Healthcare.
This major will enable students to have a salary of $33,000 post-graduation and was previously only offered at USF.
The master’s programs, environmental studies and physicians assistant studies, were also approved.
The master’s in physicians assistant studies is a long-anticipated major that promises annual salaries of $109,000.
“This is the program that many of us have been waiting for four years,” said Paul Snyder, who was present as a substitute for Provost Ron Toll. “We are still in the process of hiring faculty for this program.”
With the addition of the new majors, students asked how the process is made and why certain programs were approved over others.
Cathy Duff, the associate vice president for Academic and Curriculum Support, said that the process of creating a new degree involves the faculty, administration, the FGCU Board of Trustees and more.
In this case, the Board of Governors did an extensive analysis of workforce data to determine that the new programs were worthy of university and state resources. Duff said both programs contacted prospective students and employers to determine if the time was right to pursue these programs.
The bachelors programs will not only build upon existing strengths in the College of Arts and Sciences as well as the College of Health Professions, but they will also help the university contribute to the goals of the State University System of Florida by producing graduates who meet critical workforce needs.
These degrees offer new opportunities for prospective and undergraduate students who may have turned FGCU enrollment away in the past.
Johnathan Torres, a sophomore criminal justice major at Florida SouthWestern, is one such student. He expressed that he originally wanted to study forensic science, but due to its unavailability at FGCU, he chose not to attend the university.
“I chose criminal justice tech here (at FSW) because I thought it was the closest thing to my major,” Torres said. “I didn’t even consider FGCU because they didn’t have it, but I might now especially since it would make more sense to go straight into my bachelor’s than do an A.S. It’s just more convenient.”
Nursing major Katheryn Colbert agreed.
“It seems like a broader degree than community health, but I would have to see what classes will be in it,” Colbert said. “I wouldn’t switch from nursing to it though. I’d need more detail.”
Students currently enrolled in the community health program expressed the same worry about the impact that the new programs would have on their current curriculum, especially since the community health program would be replaced by the public health major, but Duff claims that there’s nothing to worry about.
“There is no impact on students currently enrolled in the B.S. Community Heath program,” Duff said, “Though, it will be phased out over time. Students already enrolled in community health will be able to complete all degree requirements.”
The introduction of the new majors will include the construction of Academic Building 9, the hiring of new faculty to teach the courses and a slight raise in tuition, all of which should help to keep the rate of dropouts and transfers as low as possible for the upcoming academic year.