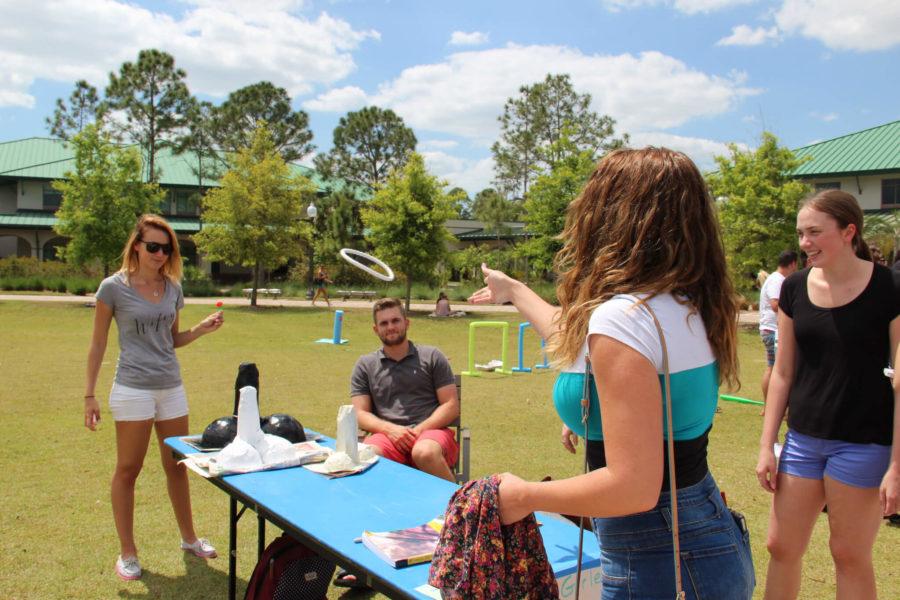 [Best_Wordpress_Gallery id=”30″ gal_title=”Queer Carnival 2016″]
With felt genitalia, Blow Pops and papier-mache penises in hand, students and professors of COM 4930, the Queer Theory course, prepared the third annual Queer Carnival on April 19.
The carnival was first created three years ago as a creative outlet for students to combat stigmas and stereotypes about the LGBTQ community as well as serve as students’ final exam. Ticket sales from the event benefit a local charity helping LGBTQ youth.
Professors Jon Braddy and Billy Huff were the ringleaders of the carnival, helping students embrace queer practices and concepts from the class while creating fun and educating activities for those who attended.
“As a way to be more innovative at FGCU, we decided to embrace some of the newer theoretical concepts,” Braddy said. “Queer theory is up and coming. It’s new. It’s been kind of established at some of the bigger universities, and so, we decided to test it here. By making students find creative performance of queer concepts, they were able to – I think – really find a creative and kind of thought-provoking display of how the theory works and operates.”
According to Michael Warner’s “The Trouble with Normal: Sex, Politics and the Ethics of Queer Life,” a textbook used in the Queer Theory course, the purpose of the carnival was based off of the ideals that, “To seek out queer culture, to interact with it and learn from it, is a kind of public activity. It is a way of transforming oneself, and at the same time helping to elaborate a commonly accessible world.”
Braddy admits that at first glance, the students were hesitant in pushing the boundaries for activities like “The Dick Whisperers,” “Get White-Girled,” “Safety Zone” and “Bobbing for Bodies.”
“They don’t know how far they can push some of the concepts here, but once they start tying it to the literature discussed, then their creativity really opens up and flows,” Braddy said. “The students, I think, have enjoyed this project.”
Students from the “Pay Your Rent” booth offered participants an inside look at the Dominican sex trade by having students pass through an obstacle course, synonymous with the acts that some sex workers have to force themselves to do to pay the bills.
“Our booth is based on ‘Western Union Daddies,’ a reading by Mark Padilla,” said Mariah Cochran, a senior communication major. “The basis of our reading was to focus on Dominican sex workers and how they have to conform to a hyper-masculine gay sex trade just to pay their rent because they make more doing that than they do at a regular job.”
At “The Glory Hole of Knowledge” booth, students explained that glory holes are completely anonymous, and the receiver is aware of what they are getting. The activity awarded participants with a Blow Pop when reaching into the “glory hole,” and attached was a quote or phrase from the various readings the course studied throughout the semester.
“We have Foucault, Judith Butler, quotes from ‘Hung,’ ‘Confessions of a Bare Backer,’ said Kirsha Caraballo, a junior communication major. “We just want to spread knowledge about queer theory and about the class in general, because a lot of people don’t know what the class is about. This kind of helps them understand.”
Participants of the “Paint Away the Hate” booth were encouraged to body paint on themselves and others phrases like “My Pussy, My Choice” and “Sushi rolls not gender roles” were colorfully crafted on various body parts of the students who created the activity.
“We’re encouraging people to body paint on ourselves, on others or on our banner, said Alyssa LaManna, a senior art major. “We’re trying to emphasize and reclaim the stigmas that people attach to bodies like disability, fatness, gender roles.”
While the event only lasted for the duration of class time, which was roughly an hour and fifteen minutes, everyone involved felt that it was a successful day and the messages of battling social norms and stigmatizing queer culture resonated with the university.
“I loved it,” Braddy said. “The students were set up so that once it was class time, they were ready. We got students and other visitors coming through and other faculty were the judges, or the assessors, for each table. I though it was great. I thought they were creative. I thought it was fun. I thought the students engaged in it, and the people passing by enjoyed it. And, that is exactly what it is supposed to do.”
Cochran believed that even if some passersby felt uncomfortable, there was a general positivity surrounding the event.
“I think it went really good,” Cochran said. “We had a couple of strange stares, but overall, there was a really good response from the community, which is what we were trying to do — break the stigma.”