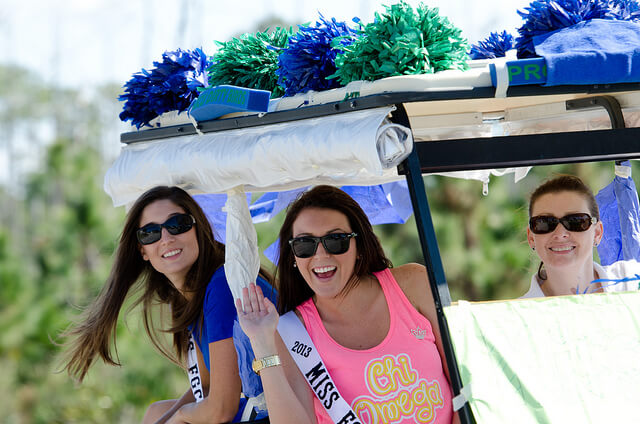 One student jumped over a car. Another pulled off a different magic trick. Most students danced. And everyone tried to look pretty.
They all vied to be Mister and Miss Florida Gulf Coast University. Excitement filled the air Tuesday night as approximately 300 students waited for the first pageant in school history to begin. Members of Greek life speckled the crowd, singing along to Taylor Swift and chatting eagerly with excitement as the lights dimmed inside FGCU’s Alico Arena.
“I think it promotes school spirit,” said Sherline Herard, an FGCU sociology alumnus. “It’s a healthy competition and it’s fun. It bonds everyone because we all go to the same school and we love FGCU.”
The crowd roared as the eight female contestants, accompanied by the four potential Mister FGCUs, made their way to the stage. Blowing kisses and waving, each contestant ignited a fresh wave of applause as they took their moment in the spotlight. Four FGCU faculty members served as judges for the competition.
Contestants were judged based on five categories; Eagle Spirit (25 percent), talent (35 percent), evening wear (25 percent), audience questions (5 percent), and an interview with the four judges that took place early Tuesday morning (10 percent).
Each potential Miss FGCU competed to participate in the Miss Florida scholarship pageant. Profits from the pageant went toward a recently developed philanthropy group called “Because Eagles Care.”
“I brought my foam finger because I’m always out here [at sporting events] rooting for our Eagles,” said Mister FGCU contestant Andrew Grillo during the Eagle Spirit portion of the pageant.
For the talent portion contestants wowed the audience with various gifted performances such as dance routines, gymnastics and even poetry.
Competitor Dezmond Wheeler earned massive applause for jumping over a red toy car.
The contestants showed off their individual glamorous sophistication during the evening wear portion of the contest. Each participator smiled ear-to-ear as they were showered with applause. It was a night of laughter, entertainment and support at FGCU’s Alico Arena. Indifferent of the campus affiliation, each contestant was supported by their fellow Eagles with round after round of applause each time they were on stage.
Mister and Miss FGCU will be announced this Saturday.