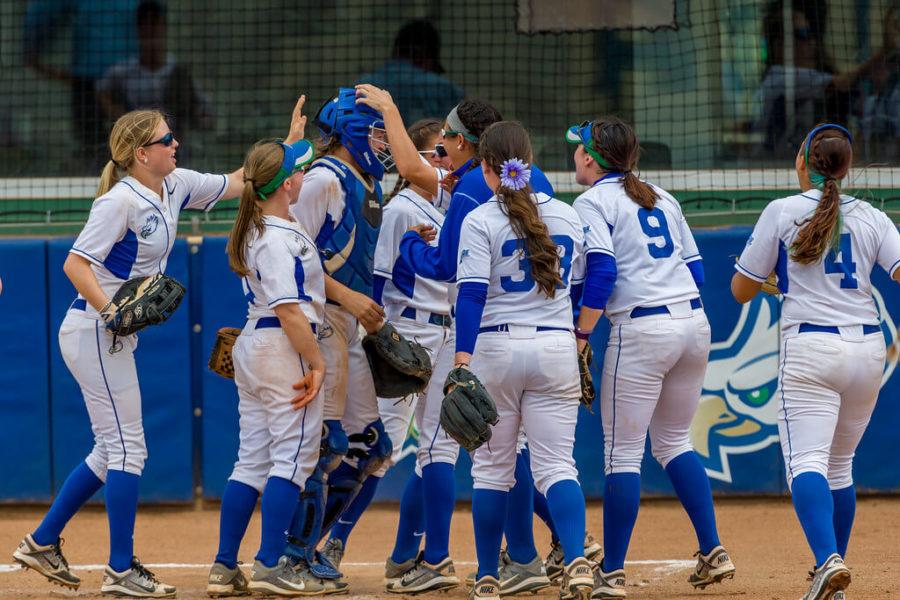 In game one of the three-game series, both offenses were held in the first inning, but FGCU broke through in the second.
Senior, Louie Ross, drove a 1-2 pitch over the fence for a three-run homerun, her third of the year, to give FGCU a 4-0 cushion. Racquel Fournet followed with a single, and then, Chandler Middlebrook hit FGCU’s second homerun of the inning to put FGCU in front 6-0.
The Eagles quickly went back to the plate after two strikeouts at the end of the third. Two pitches into the fourth, Bree Tourtillott collected her second RBI of the game on her second homerun of the season. Leading 7-0, Riley Randolph allowed a run on a homerun in the fourth, the first hit allowed by the freshman.
In the fifth, Randolph slammed a strikeout and a pair of ground balls to make the final score 8-1 in favor of the Eagles.
FGCU took an early 1-0 lead in game two of the three-game series. The Eagles then put the first two runners on in the second on singles by Bri Innamorato and Natalie Lopez. Kelsey Huff brought in Lopez with a double before a Makensie McAvoy groundout scored Amber Plaza.
With a 3-0 advantage, the Dolphins threatened the Eagles with runners on corners, but Taylor Wade forced a foul out before striking out the final batter of the inning.
FGCU tallied two more runs in the third, taking a 5-0 lead into the bottom of the third. With one out in the inning, Ross and Fournet hit back-to-back doubles, pushing the score to 6-0.
After Jacksonville put the first two runners on in the sixth, Randolph proceeded to strike out the first two batters she faced and then forced a pop out to end the game, with an end score of 8-0 in favor of the Eagles.
Next, FGCU looks to clinch its first outright Atlantic Sun Conference title today at 1 p.m. in the series finale against Jacksonville.