FGCU featured in the spring 2016 issue of “Unique Venues” 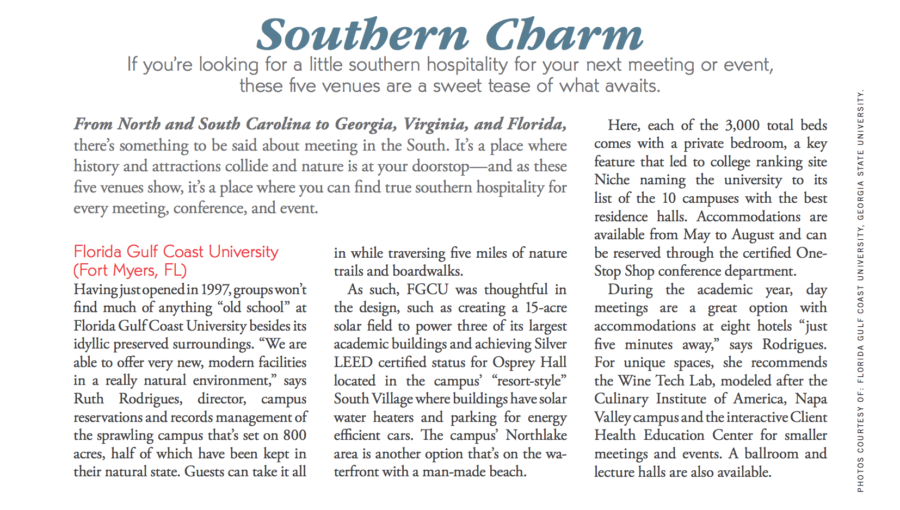 FGCU has again found itself ranked among prestigious universities across the U.S.
“Unique Venues Magazine,” a publication for those who are seeking the perfect event space for anything from a corporate meeting to a wedding, featured FGCU in its spring 2016 issue.
The spread, titled “Southern Charm,” listed five universities in the southern region of the U.S. that potentially double as quality learning institutions and event venues. FGCU was the first college on the list.
“Having just opened in 1997, groups won’t find much of anything ‘old school’ at Florida Gulf Coast University besides its idyllic preserved surroundings,” the opening line reads.
The blurb then went on to discuss FGCU’s environmental efforts, including its 15-acre solar field as well as Osprey Hall’s recent achievement of reaching Silver LEED certified status. South Village and North Lake Village were mentioned as suitable venues on campus as well as the Wine Lab located in Sugden Hall.
Also included on the list were Georgia State University in Atlanta, Georgia; The College of William and Mary in Williamsburg, Pennsylvania; the University of South Carolina in Columbia, South Carolina; and Western Carolina University in Cullowhee, North Carolina.
You can read the article here.