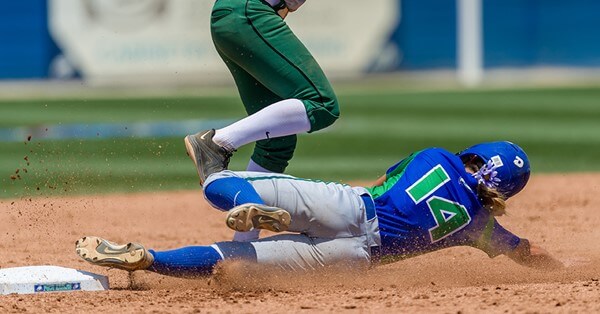 Coming off a 7-2 win over Jacksonville to claim the Atlantic Sun softball title, the Eagles turned their attention to the A-Sun tournament. The first round of the tournament was scheduled for Wednesday, May 11, with FGCU taking the field against Kennesaw State on May 12.
Riley Randolph was perfect through four innings and had a no-hitter into the sixth to pave the way for the Eagles in their first game of the 2016 A-Sun Championships. Kelsey Huff got the offense going for FGCU with a leadoff single, scoring the first run in the third. The Eagles tallied another run in the fifth before Randolph closed out the game with her eighth strikeout with runners at first and second.
Randolph, the 2016 A-Sun Freshman and Pitcher of the Year, shut down the Owls, as she allowed only one baserunner through five innings on an error. In the bottom of the fifth, FGCU doubled its lead with an RBI single from Makensie McAvoy, scoring Natalie Lopez. Kennesaw State scored its first hit in the sixth, but scoring was short-lived due to Louie Ross’ gathering of a pop fly to end the inning.
Huff reached twice in the ballgame and scored a run. McAvoy, Lopez, Racquel Fournet, Chandler Middlebrook and Bree Tourtillott also tallied singles for FGCU.
Next, the Eagles took on No. 2 seed USC Upstate on Friday, May 13 in the semifinals of the A-Sun Championships.
In a battle of the top-two teams from the regular season, USC Upstate tallied a run in the first following a leadoff triple and a groundout against Ashley Dobson to end the inning with little damage.
Another Upstate run in the second put the Spartans in front 2-0 before Racquel Fournet became FGCU’s first baserunner against Holly McKinnon, drawing a walk to begin the bottom half of the second.
McAvoy drew FGCU’s second walk of the game to lead off the seventh, but the senior was stuck despite a line drive off the bat of Carissa LiCata to end the game 3-0 in favor of the Spartans.
However, later that day, the Eagles bounced back from their earlier defeat, scoring on an RBI fielder’s choice from Louie Ross. Huff scored on the play after leading off the inning with a single.
Taylor Wade kept the Owls off the board through the first two innings but allowed a run in the top of the third on an RBI single. With momentum on their side, FGCU took advantage of a two-out error, allowing Huff to reach and take second. McAvoy immediately doubled down the line to score Huff.
In the sixth, the Eagles had an opportunity to increase their lead after putting the first two runners on base. Fournet and LuLu Newmark reached to lead off the inning for FGCU and moved to second and third. With two outs in the inning and runners at the corners, Hynes delivered a double hit to right center, plating both runners to make the final score 4-1 in favor of the Eagles.
On Saturday, May 14, the Eagles had to take on No. 2 seed USC Upstate in the A-Sun Championship Final to move on to the NCAA Tournament.
After a scoreless five innings to start, the sixth inning proved to be the decisive inning in the 5-1 defeat for the FGCU softball team in the Atlantic Sun Championship Final. The Eagles claimed a 1-0 lead in the top of the sixth and left the bases loaded before allowing five in the bottom of the inning to the USC Upstate Spartans.
With the first five innings being uneventful, FGCU finally scored against a new USC Upstate pitcher off of a go-ahead run on a Louie Ross double. Leading 1-0, the Green and Blue loaded the bases but could not capitalize further, sending the game into the bottom of the sixth. Upstate took advantage of an error, putting runners on second and third. With two outs, Gabbee Draney entered the game. Upstate plated three more runs in the inning to take a 5-1 lead into the final frame.
The Eagles put pressure on the Spartans in the seventh, putting two runners on; however, the deficit remained 5-1 in favor of USC Upstate.
“The long and short of it is we are champions, and we need to walk around like champions,” head coach David Deiros said. “The other piece is there is no better motivator than failure. I want them to remember that inning, so it doesn’t happen again.”
Following the conclusion of the tournament, McAvoy, Ross and Wade were named to the All-Tournament Team.