Board of Trustees members disagree on new strategic plan 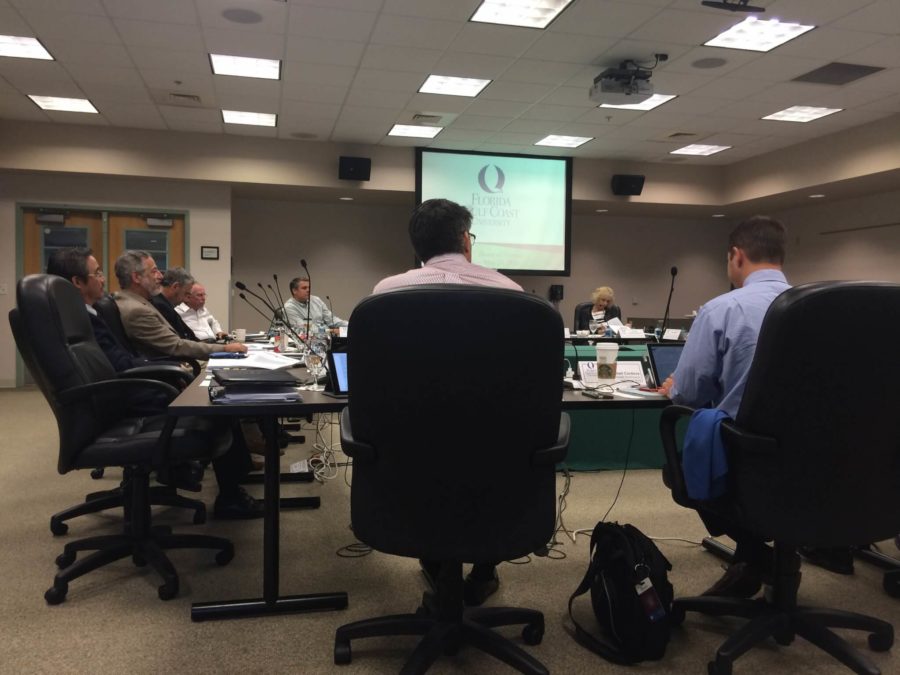 Conflict ensued when FGCU Board of Trustees members both defended and argued against the new 2016-2021 strategic plan during the Friday, May 20 special committees meeting.
The plan, called “Focus 2016-2021,” has four pillars — academic excellence, entrepreneurship, health sciences and emerging pre-eminence.
“Focus 2016-2021 builds on Florida Gulf Coast University’s existing areas of strengths such as the focus on teaching and learning, expansion of community and civic engagement, emphasizes on critical thinking skills grounded in the liberal arts and humanities. However, this plan specifically focuses our energies and resources and provides for special emphasis on the most immediate issues that FGCU is positioned to address,” the essential activities section of the plan said.
Special Committee Chair and Faculty Senate President Shawn Felton led the meeting, detailing the work put into formatting the plan. Felton met with the deans of the five colleges and asked them to give objectives and goals for their institutions.
“The deans worked really hard to pull this together,” Felton said.
Trustee Ken Smith, who also serves as the chair of the Presidential Search Committee, was the first member to speak in regards to the plan, which focuses on shrinking the six-year graduation rate.
“I like the plan; I think it hits focus on the two most important things: getting kids out and getting them jobs,” Smith said. “I like that you have narrowed it down.”
In regards to a section of the plan that addresses the Emerging Technologies Institute, the new facility off campus that focuses on environmental research and engineering, Smith said that he believes that the institute should focus on entrepreneurship instead of renewable energy.
“We aren’t equipped to do it,” Smith said. “Entrepreneurship is something that we talk about here. We need to make a commitment.”
Whitaker College of Engineering Dean Richard Behr retaliated, stating that with the hiring of the new Backe Chair of the ETI, John Woolschlager, the facility will thrive.
“This gentleman has an ambitious plan,” Behr said. “I respectfully ask that you consider the original intention for the ETI and allow us to pursue that mission.”
Smith then said that he didn’t mean to insinuate that Behr and the rest of the ETI team shouldn’t focus on renewable energy but believes that entrepreneurship should also be included.
“I think we should do some of that,” Smith said. “This is about resource allocation at the end of the day. I think we got to find a place to put entrepreneurship up.”
Trustee Russell Priddy then diverted the committee’s attention to the deans, asking them what they thought of the plan.
Lutgert College of Business Dean Robert Beatty expressed his positive feelings about Focus, stating that he was pleased with it.
“I think the strategic plan is fantastic,” said Mitchell Cordova, the dean of the College of Health Professions and Social Work.
He then discussed how the board could be more broad, thus helping “bridge the gap” between the Strategic Plan and the Board of Governor’s Work Plan.
Dean Behr, however, expressed that the twelve goals under the emergence pre-imminence pillar were extremely unreachable.
“We are so far away from that it’s absurd,” Behr said.
The only two parts that he thought were attainable within the next five years is raising the freshman retention rate and increasing four-year graduation rates.
Trustee Christian Spilker motioned to move the Strategic Plan to the June 7 BOT meeting.