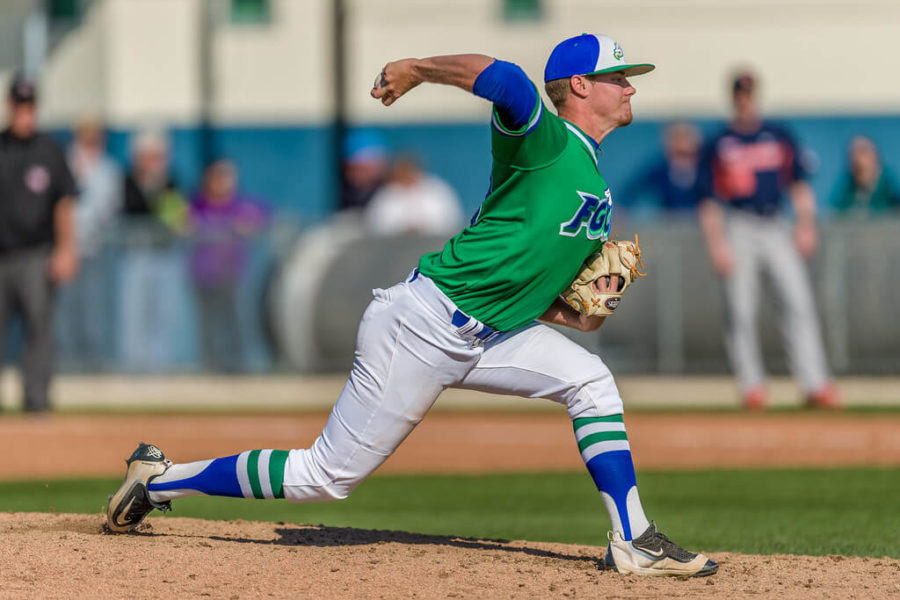 In a three-game series against Kennesaw State this past weekend, FGCU took tough loses against the Owls in all three games. Despite recording a season high in strikeouts in game two and storming back from a five-run deficit in game three, the Eagles found it difficult to bounce back from the early mistakes made in both games.
Game two for FGCU was both rewarding and disheartening. As a team, FGCU’s 13 strikeouts were the most since also striking out 13 versus Jacksonville on April 10 of last season. However, despite this record season high, the FGCU baseball team lost game two to Kennesaw State 7-1 on Friday night at Swanson Stadium.
After retiring 10 of the first 11 batters at the start of the game, Kenton Hering allowed a one-out single to Griffin Helms and issued a walk to Taylor Allum before Jeremy Howell hit a three-run home run to left field to give the Owls a 3-0 lead in the top of the fourth.
The Eagles responded in the next inning, as Jake Noll led off the inning with a single to left center and later scored his conference-leading 57th run of the season on Corey Fehribach’s double.
With both teams scoreless in their next three trips to the plate, Kennesaw State scored four in the eighth to push the score to 7-1. With runners on the corners and one out, Howell drove in his fourth and fifth runs of the game on a double to right center to relieve pitcher Sterling Koerner from the game.
FGCU threatened to make things interesting in the bottom of the ninth, as it loaded the bases but couldn’t finish, ending the game 7-1 in favor of the Owls.
The regular season wrapped up with Saturday’s game at noon at Swanson Stadium. Before the first pitch, there was also a recognition of the seniors — Noll, Brady Anderson, Colton Bottomley, Clint Knoblauch and Tyler Seleky.
After storming back from a five-run deficit to tie the game, 6-6, in the bottom of the eighth, FGCU still came up short, as it dropped the regular-season finale versus Kennesaw State, 8-7, Saturday afternoon at Swanson Stadium.
The Eagles were able to score one run in the fourth, one in the sixth, two in the seventh and two in the eighth to come all the way back and tie the game, 6-6. However, Kennesaw State scored two runs in the top of the ninth to reclaim its lead.
With two outs and a runner on third, Austin Upshaw lifted the ball to the left field line, dropping past the glove of Zach Spivey and allowing the go-ahead run to score. Three pitches later, Howell bounced a ball through the right side to score Upshaw and give the Owls a two-run cushion.
In the bottom of the ninth, Kennesaw State closer Erich Stahl struggled to start the frame, as he hit Zachary Orchard and walked Matt Reardon to put the first two Eagles on bases. Noll then reached on an error, and Orchard came around to score on the play to bring FGCU within one. But, Reardon was indecisive around second and was tagged out on the play.
Then, Selesky was hit by a pitch, and Jay Hayes was walked to load the bases with one out. But, in the end, the Owls retired the next two batters, finishing with an 8-7 win over the Eagles.
“I was proud of the way the guys responded to come from behind today,” FGCU head coach Dave Tollett said. “We just made too many costly mistakes to get it done. We’re still in the same situation heading into next week, and we believe this thing really is anyone’s tournament. Let’s see if we can’t string a couple wins together and see where we are at this point next week.”
Despite Saturday’s loss, FGCU claimed the No. 5 seed in next week’s Atlantic Sun Baseball Tournament and will play No. 2 UNF at 4 p.m. Wednesday in Nashville, Tennessee. The tournament is a double-elimination format with the championship scheduled for 2 p.m. Saturday.