Police Beat: Loose inmate, weapons found in a car, and a stuck elevator 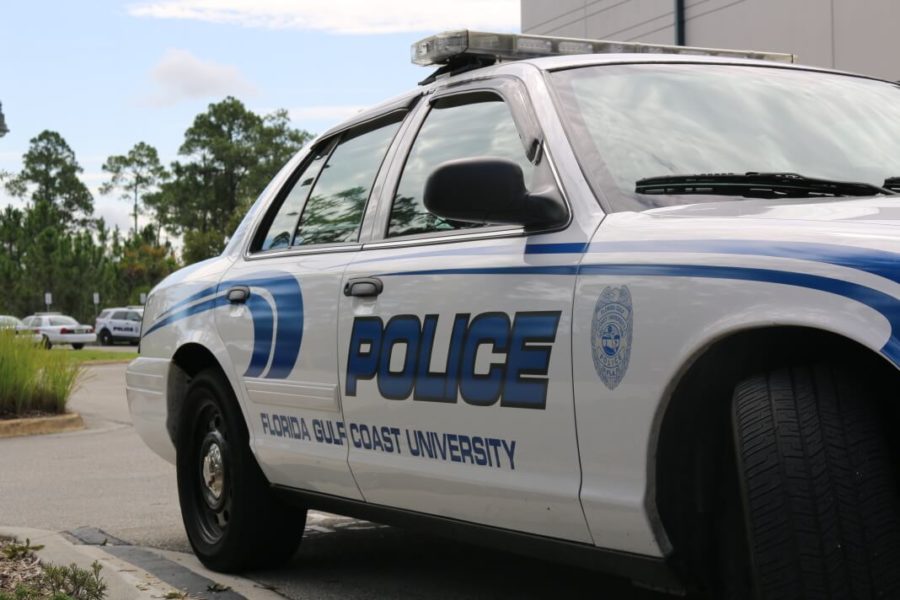 Loose inmate
On Tuesday, May 24 at 12:17 p.m., a San Carlos firefighter noticed a work squad inmate running south along the fence behind the station. He was described wearing a blue shirt and pants with white stripes. The Lee County Sheriff’s Office was advised by San Carlos Fire Department and confirmed the missing inmate at 12:20 p.m. At 12:35 p.m., LCSO locked down the Kleist Health Education Center, and at 12:39 p.m., the Family Resource Center was locked down. At 1:01 p.m., the inmate was seen on the South Bridge Loop Road in South Village and was then taken into custody.
Sick person in Cohen Center
On Thursday, May 26 at 11:44 a.m., Campus Reservations called UPD stating that a father was complaining of being lightheaded, pale in the face and sweaty. At 11:45 a.m., the caller was transferred to Lee Control. The victim refused transport after an EMS arrived.
Dog in car parked in Garage 3
On Thursday, May 26 at 4:01 p.m., a complainant called UPD stating that there was a dog in a car on the first floor of Garage 3. The vehicle was not running, but the windows were down. The animal didn’t seem like it was in distress. Contact was made with the owner at 4:07 p.m., and she stated that the dog was fine in her car and that there was a thermometer in her car. At 5:33 p.m., two additional complaints came in in regards to the dog, and an officer went back to check on the animal, which still seemed fine. The owner then stated that she would be checking on the dog every 45 minutes.
Palmetto elevator stuck
On Thursday, May 26 at 7:06 p.m., a complainant called UPD and stated that she was stuck in the first elevator with 14 others on the first floor. At 7:09 p.m., Lee Control was notified and en route. At 7:13 p.m., all subjects were removed from the elevator.
Marijuana, weapons found in car
On Thursday, May 26 at 10:03 p.m., a UPD officer began searching a vehicle at the South Village bridge for failure to stop at a stop sign. The officer noted that the vehicle smelled strongly of marijuana, and the driver stated that he had smoked in his car a few hours earlier. The search revealed a small amount of marijuana, a machete between the driver’s seat and the console and an air soft revolver under the front passenger seat. The driver was not a student but stated that he was on campus working at SoVi. He was then issued a uniform traffic citation for failure to stop at a stop sign. A field interview was completed, and he was advised to not bring the revolver or machete back on campus.
Possible suicidal person off campus
On Saturday, May 28 at 6:42 a.m., a parent of a student called stating that his daughter’s ex-boyfriend was threatening to kill himself and that he had sent a picture of himself holding a gun to his head to his daughter. The daughter had recently broken up with the boy, who lives off campus. She didn’t know his address but stated that he lived in an apartment in Fort Myers near campus. After stating that he was just depressed and lonely, the ex-boyfriend then stated that he did not want to cops involved. At 7:55 a.m., he stated that he didn’t want to harm himself or anyone else.
Possible overdose in North Lake
On Tuesday, May 31 at 7:58 a.m., Lee Control was contacted to handle a possible overdose on campus in North Lake Village. The complainant contacted Lee Control in regards to her sister, who she was concerned about. The victim was then transported to Gulf Coast Hospital, who then told the complainant that she took two oxycodone, two trazadone and one muscle relaxer and began to feel dizzy. The victim stated that she took them for pain in her shoulder, not to hurt herself.