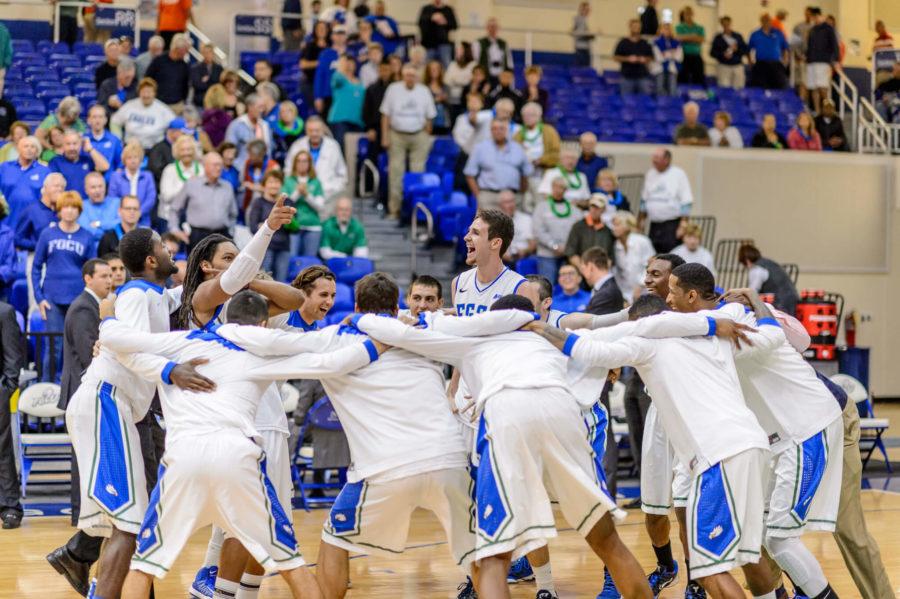 After a 74-49 win over USC Upstate, the Eagles have clinched a berth in the Atlantic Sun Championship tournament and hold sole possession of first place position in the conference. However, this big win did not come easily.
“We missed seven layups in the first half,” FGCU head coach Andy Enfield said. “This was the worst offensive half in the last six games.”
After leading by only six points at the half, FGCU came out in the second half with the intensity they needed to pull off the 25- point win over USC Upstate.
“We wanted to hold them under 50, and we did that,” senior forward Eddie Murray said.
The hype of a nationally televised game and a student section dressed for a white out gave the Eagles the energy that was needed to complete the victory.
“This was the best crowd since the game against Miami. People are supporting us and that’s great,” Enfield said. “Our goal is to get our students involved, and the only way to do that is to put a product on the floor.”
Putting product on the floor is just what the Eagles have done this season. With a 10-3 conference record, the Eagles lead the A-Sun. Nevertheless, there is still work to be done.
“We’re getting closer and closer but we’re still not the best we can be. We just come out to play as hard as we can,” said senior guard Sherwood Brown.
Murray and Brown are the only two seniors on the men’s roster. The Eagles are a young team, but this does not seem to be an obstacle. The talent goes beyond the five starters.
“We have the luxury of having players come off the bench,” Murray said.
Despite being young, FGCU has faced tough challenges this year and has overcome them all.
“We’ve played at Duke, VCU, St. John’s, and Iowa State. They’ve seen it all. They may be young by age but they’re experienced,” Enfield said.
With five games left in a tough conference, the Eagles have a long way to go. Yet, as the team matures and grows, achieving the goals of winning the A-Sun are within reach.