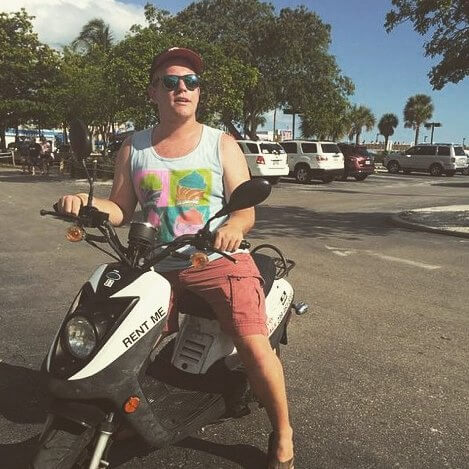 Luke Janke, an FGCU student and talented musician, recently produced his self- made EP entitled “Love Birds” through his music project Bull Moose Party on June 1.
Listening to the album feels like being in the honeymoon phase of a new relationship. The simple stripped down melodies are both fun and sweet, combatted with lyrics that will definitely get the listener thinking of their special someone.
The indie folk pop release is available for a free MP3 download on bandcamp.com along with another short EP by Janke titled “I…” and a track entitled “Be As It May.”
Janke is a senior journalism major and the former assistant opinion editor of Eagle News who hopes to one day write musical reviews of his own.
Of the inspiration behind the musical endeavor, Janke said his experience with chronic writer’s block combined with young love helped give life to the album.
“I started writing ‘Love Birds’ in winter 2015 when I was experiencing some pretty chronic writer’s block,” Janke said. “I had been writing some grand arrangements for my first full-length LP, which is yet to be released. But, all the work was giving me anxiety, and I wanted to work out some kinks by writing simple, stripped down songs.”
As for the lyrical content of the album, Janke was inspired by his personal life.
“The relationship I was in at the time was in its honeymoon phase and simple little melodies kept entering my head when I was out walking or driving, and so, I put some songs together that related to my relationship and older song ideas I had written years ago,” Janke said. “It was sort of a retreat for me to loosen up and let the creative juices flow. Even though a few tracks on ‘Love Birds’ came out a lot grander than I anticipated, it’s just a collection of songs about adolescent love.”
When it comes to making music, Janke is far from finished. He’s got many more projects that are in the works and is working on performing some live productions.
“Right now, I’m booking myself in venues around Southwest Florida and hope to get a local following before I start anything big,” Janke said. “I’m also recording a short concept EP currently, called ‘Hymns for the Working Class,’ and it’s about the woes of living without a whole lot of money. I’m not putting a whole lot of weight on it though because I want to release my full length this year, ‘Separation of Church and State.’”
Janke’s dream is to have a solid fan following by the time he’s in his thirties, but right now, he’s just grateful for the cathartic creative outlet and plans on carrying on his music for the rest of his life.
Bull Moose Party’s EP is available to stream on Spotify and to purchase on iTunes.