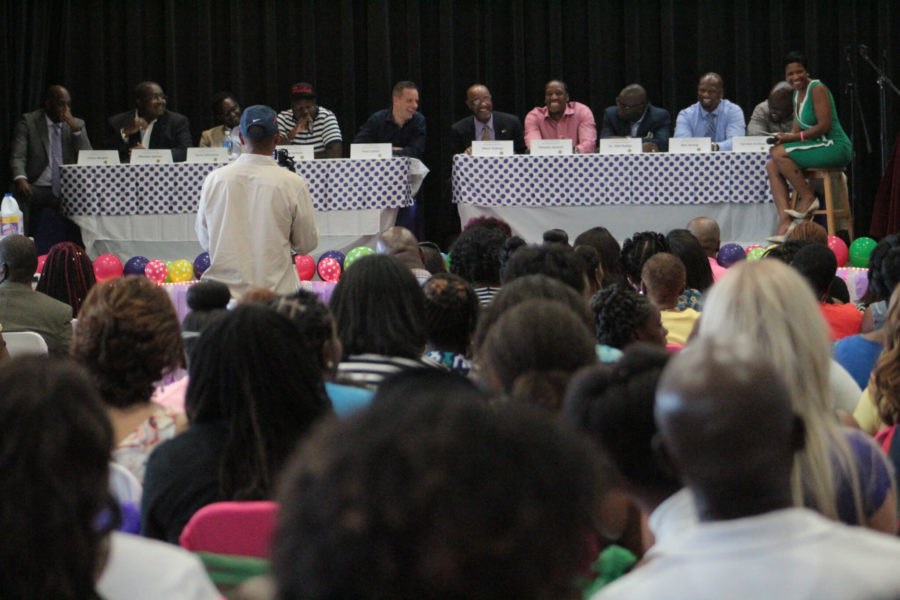 Despite the thunderstorms and rain, Riverside Community Center was a full house on July 17 during the No Girl Left Behind event where several Eagles chose to spend their time helping the community.
The Christian- based service hosted by Tasheekia Perry included several members of the community such as Lisa Talbert, Free2Lead founder LaTanya Mitchell, FGCU alumna Brittany Thompson and FGCU students who volunteered their time as part of their service-learning requirement.
The event included live musical performances from students and residents of the area and dance performances by Lisa Talbert. For the first time, Men Building Girls and Women, a panel featuring community male leaders, spoke about the importance of women in the community, members’ experiences as men and what it meant to be a man and a father that could encourage and inspire the youth of today.
No Girl Left Behind strives to empower young girls to be their best while encouraging growth and development, but it also strives to make girls understand that they’re more than just their looks or their bodies.
Despite the rain outside, members of the community prayed, laughed and learned together while others performed or took the stage to present scholarships that would help young girls in need.
While the adults were preoccupied, FGCU students and Thompson worked to help in any way possible.
With two current FGCU students by her side, Thompson, the co-author of “E.P.I.C.: Envision. Plan. Initiate Change,” taught a group of 12 young girls about the importance of an apple seed and how it related to their lives.
She explained that one seed could be responsible for the growth of thousands of trees and compared that small apple seed to each one of the girls in the room.

“This (seed) can go on forever,” Thompson said. “Its potential is forever. You are all seeds. You have the potential to go anywhere and do anything.”
Thompson urged the girls to do whatever they wanted and gave praise to a young elementary girl who said that she wanted to be an anesthesiologist while motiving another to take her dream to become a dancer and make it a reality.
Meanwhile, current students Diana Lopez and Missy Salomon volunteered their time to set up equipment, hand out fliers and greet guests as they came in.
Both girls, with guidance from Elizabeth O’Dell, a fellow classmate, volunteered their time because of their passion for the cause.
“I didn’t know what I wanted to do for my service-learning requirement,” said Salomon, an FGCU student and intern at Radio FM 103.9. “But, I decided to do this because I’m a firm believer in starting from the bottom and raising kids right. Besides, girl power.”
Lopez, a senior psychology major, had a simple reason as to why she volunteered.
“I like the idea of women empowering women,” Lopez said. “And, I wanted to be involved in that.”
Students of a summer colloquium class partnered with three organizations and Perry, the founder of Crowning Daughters for Success, to put on the No Girls Left Behind Project 2016, an annual event that celebrates female empowerment, and the community response to the aid provided was appreciated by many of the attendees, including Sheila Edwards, Perry’s mother.
“The turnout is always great,” Edwards said. “The community always comes out, and it always brings me to tears.”
Delete Image
Align Left
Align Center
Align Right
Align Left
Align Center
Delete Heading