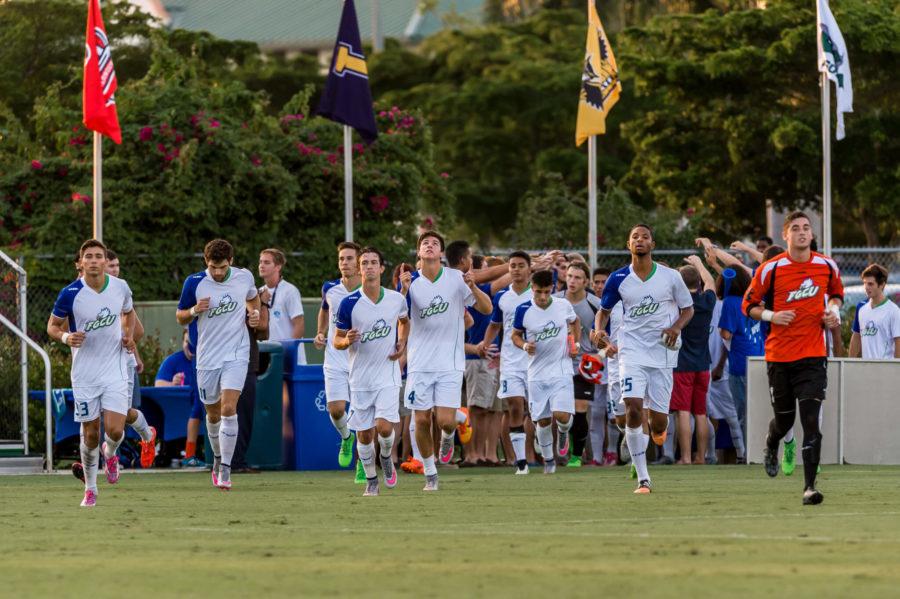 In just a little bit over a month the FGCU men’s soccer team makes their long-awaited return to the pitch, when the six-time Atlantic Sun Conference regular-season champions take the field against Northwestern on Aug. 26 as head coach Bob Butehorn looks to guide his side to their first NCAA tournament since 2014.
With three of his seven seniors reaching the next level competing in the MLS and the NASL, Butehorn recruited players from around the world to bolster an already experienced squad.
A right back from Nicosia, Cyprus, Paris Psaltis joins the Eagles after competing in the U-19 UEFA Champion’s league and winning two titles with the U-21 Apoel FC club team.
Joining Psaltis from Europe is French center back Thomas Delplace. A product of Toulouse Football Club, Delplace has been featured in camps at the U-16 and the U-19 level for the French national team.
Jiro Barriga Toyama, a junior transfer from Barton Community College, is the only transfer joining the Eagles this fall. Before sustaining a season-ending injury his sophomore year, the Chiba, Japan native scored four goals and dished out nine assists earning him 14 points in just nine games at the forward position.
A goalkeeper product of BWFA and Santa Cruz Futebol Clube joining FGCU is Gustavo Vasconcelos. A native of Recife, Brazil, Vasconcelos has also trained with MLS side Orlando City.
Along with the recruits from out of the country the remaining six recruits found much success at the high school level, earning multiple recognitions and awards as they helped their schools reach new heights.
“I’m optimistic about the class,” Butehorn said. “I think it’s a very, very talented class. I think trying to replace seven seniors will be very difficult chemistry-wise, but as far as talent goes I think every one of those players that we brought it in has a chance to make an immediate contribution; whether it’s with character or work ethic but they are definitely some top level recruits.”
With almost an entirely new squad ready to take the pitch, the Eagles face a tough 2016 schedule as they battle it out against three Big Ten opponents and four 2015 NCAA tournament participants during their 17 game campaign.
Commencing the 2016 campaign on the road, three of the Eagles first four games of the season will be played on the road against Northwestern, Loyal Marymount and UC Irvine.
FGCU’s home opener against Michigan on Aug. 29 will mark the fourth consecutive season the Eagles face a BCS program to begin the season after Kicking off last season with a 0-0 draw against then nationally ranked No. 3 Georgetown.
When conference play comes around in October, the Eagles will hope to have found their chemistry as a team as the program begins their battle for their unprecedented seventh consecutive conference regular-season title.
“We’ve put together another challenging schedule, in particularly, at home with perennially- strong opponents,” commented Butehorn. “Fans in Southwest Florida will have a great opportunity to see marquee teams take on our fast-paced attack. It’s a good mix of first-time opponents, some bigger names and in-state rivals to help prepare us for the always-tough A-Suns schedule.”
Delete Image
Align Left
Align Center
Align Right
Align Left
Align Center
Delete Heading