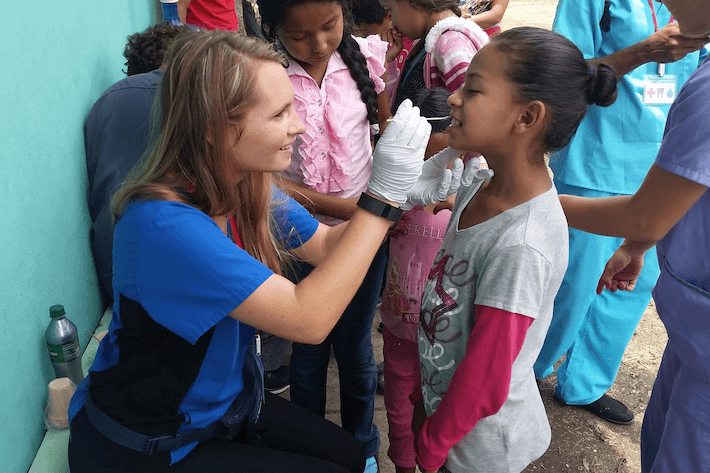 During the summer, college students do a lot. From spending time with old friends to vacations with family, the three months that constitute summer vacation can seem as open as the ocean. However, most students don’t spend their time in Nicaragua shadowing doctors and administering medicine to those in need.
For Global Medical Brigades, a registered student organization on campus that encompasses pre-med students who partner with local agencies to provide medical care, this is the norm. On Monday, May 2, 33 students and two faculty members left Miami International Airport and headed to Nicaragua, armed with pharmaceutical supplies and medication.
“It was the best trip I’ve had, and I’ve been on three,” said Rachel Walter, a senior and president of GMB. “We had a lot of students, and we were worried that that would be a problem. But, it ended up being great.”
Despite being denied funding by Student Government, GMB was able to raise the funds to purchase medication, dental supplies and stethoscopes itself. However, SG did grant GMB travel funding, so members didn’t have to pay for plane tickets themselves. Before the bill that Walter and former president Elvis Barrera drafted was failed, there were 56 students lined up to go on the trip.
“We were just kind of cautious because of what happened with our situation,” Walter said.
Club members held car washes to raise money, but they ended up paying for a majority of the funds out of pocket.
Global Brigades, the parent organization that GMB serves under, “was nice enough to section off our payments,” Walter said. Members have to pay $460 by July 31 instead of owing all of the money up front.
The trip consisted of three clinical days where club members spent time at five different stations that were set up to help those in need of medical attention. The first station served as a check-in point for patients, called the triage. Patients’ blood pressure was taken as well as their weight and height at this station. This was also where their chief complaint was noted. The second station was where patients were checked out by doctors, who were being shadowed by GMB members.
“It was really good experience for students to get hands-on experience,” Walter said.
The third station, dental, was where patients could go to get their teeth cleaned. There was one dentist working at that station. The fourth station was the pharmacy where Walter, along with a few other students, would fill prescriptions. The final station served as a sanctioned area just for kids.
“I really liked how everyone found what they liked,” Walter said. “Everyone had a favorite (station), and that was awesome. It was really awesome seeing that people were finding something that they liked and that they were good at. No one was sitting around.”
Katie Leone, the environmental stewardship and sustainability coordinator of environmental health and safety on campus, served as one of two advisors who chaperoned the students on the trip.
“They are a joy to advise,” Leone said. “They’re just a great group of students; they’re really organized and professional.”
Leone was on data entry during the entirety of the trip, leaving more room for students to learn from professionals. She has gone on the GMB trip with members for the past two years and has enjoyed seeing the students helping others.
“It’s really fun watching them in action because they’re getting hands- on experience,” Leone said. “It’s always really interesting to see them grow in that way.”
During its last three days in Nicaragua, GMB focused on water quality. Members went into communities and surveyed locals about water quality. Walter and the rest of the crew had to walk three to ten miles just to get fresh water.
“We did a lot of construction; we dug up a pipe and removed it,” Walter said. “We weren’t expecting to do anything like that.”
Walter enjoyed this year’s trip more than those of years’ previous due to an overall sense of togetherness found among the group.
“Last year, people were isolated, but everyone was together this year,” Walter said. “Everyone knew who everyone was. It was really great.”
The club won’t try to get funding from SG for future trips’ medical supplies and equipment.
“My personal goal is to not use them,” Walter said. “I don’t foresee us needing anything from them except travel. I would love to not need them. Not because we had a problem last year, I want us to do it ourselves.”
Walter plans on teaming up with fundraising chair Ivie Patino to come up with new and exciting ways to fundraise.
“We need to do something different,” Walter said. “Car washes are not enough.”
This coming summer, Walter hopes to return to Nicaragua again to make more of an impact on the community there.
“Going back to the same country every single time is the most sustainable thing,” Walter said. “We’re making a huge difference in the same area.”
Delete Image
Align Left
Align Center
Align Right
Align Left
Align Center
Delete Heading