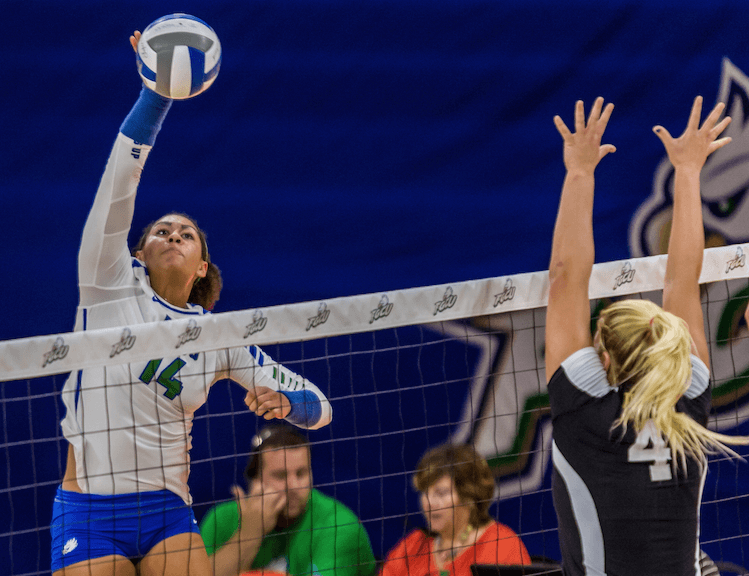 FGCU volleyball’s rising sophomore, Amanda Carroll, traveled to Colorado Springs, Colorado alongside fellow Eagle, Leigh Pudwill, to participate in the USA Volleyball’s Open Tryout.
The 10-day camp began June 21 on the campus of DePauw University. Through two practice sessions, which began at 9 a.m. and concluded at 6 p.m., Carroll learned the USA Volleyball system, speed and technique. After the fifth day, the groups were sorted into teams, and the camp moved to downtown Indianapolis for a series of three matches.
While Pudwill was named a reserve, Carroll’s name arose from nearly 300 others, joining a group of only 36 collegiate players from across the nation to be named to the USA Volleyball Collegiate National Team — Indianapolis. Carroll was one of just 57 freshmen to tryout and seven to make the Indianapolis roster.
With the roster dominated by Power 5 schools, Carroll, the Atlantic Sun’s Freshman of the Year, was joined by the A-Sun’s Setter of the Year, Lipscomb’s Kayla Ostrom. They were two of a select few representing non- Power 5 conferences.
In her first season at FGCU, Carroll made an immediate impact, posting one of the best individual performances in FGCU history and tallying 23 kills and 32 digs at Jacksonville in a crucial A-Sun match. Also an All-Tournament Team honoree, Carroll concluded the year with 415 kills, 332 digs and 26 aces.
Carroll, along with Pudwill and two additional returning starters, hopes to bring FGCU back to the top of the A-Sun with the 2016 season beginning in Athens, Ohio on Aug. 26.
Delete Image
Align Left
Align Center
Align Right
Align Left
Align Center
Delete Heading