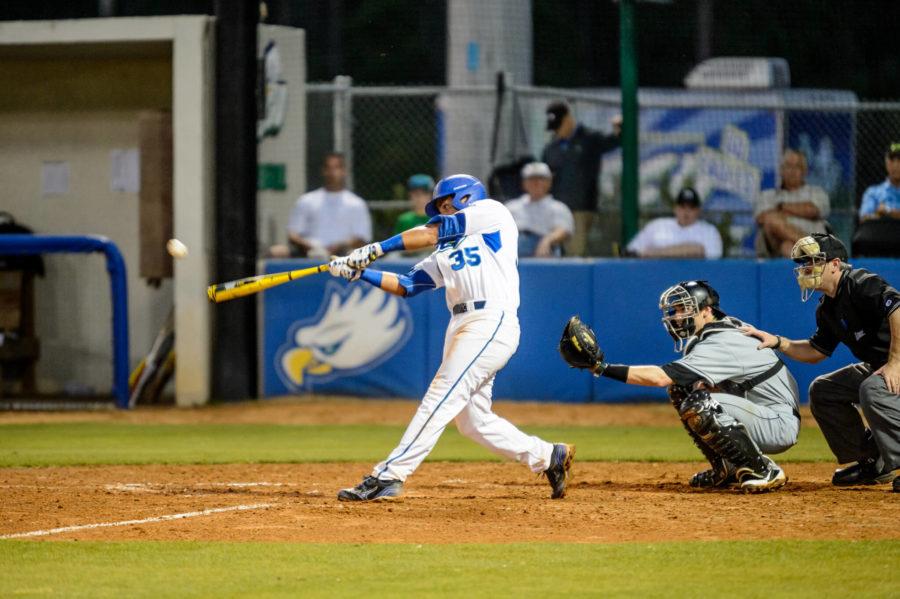 FGCU baseball is starting out the season as the A-Sun Conference projected
favorite. They had the chance to prove that they deserved this while playing St. John’s University of New York and Notre Dame this past weekend at the Snowbird Baseball Classic at Ed Smith Stadium in Sarasota.
They shut out St. John’s on Friday, 6-0, and on Sunday, 4-0. However, on Saturday they
lost to Notre Dame in 10 innings 6-5.
“We feel we let Notre Dame get away,” FGCU head coach Dave Tollett said. “The guys are okay with the weekend but aren’t happy. It’s a good sign when they aren’t
happy with being 2-1.”
Preseason pitcher of the year Ricky Knapp got the start in the season opener against St. Johns. The junior threw six shutout innings and only gave up two hits and one walk all while striking out five.
“This weekend was a good test and a good learning experience, but we can’t make any game bigger than it is,” Knapp said.
After having played well over the weekend, the Eagles are ready to take on University of Florida in a three game series starting Friday. As Knapp stated, their focus will be on taking one game at a time. Florida will be a great test for the Eagles, as the Gators are ranked No. 17.
“We played good baseball, but we’re not happy not being 3-0,” junior utility player Brandon Bednar said. “[The Snowbird Classic] has given us the confidence that we can beat UF though.”
A-Sun fans voted Bednar preseason Player of the Year.
“It’s a nice honor but it doesn’t mean much.,” Bednar said. “I still come out and play my game every day like I have since I was eight.”
He received this honor over players from Mercer, USC Upstate, UNF, and Kennesaw State. These are the schools that Coach Tollett noted as being FGCU’s biggest
competition this year in the A-Sun. Even though they are not happy with the weekend’s results, the Eagles proved that they are ready to fight to make it to their first NCAA tournament ever.
“Our goal is to strive to get to the NCAA tournament,” Knapp stated. “I 100 percent
believe this team can do it.” FGCU came close last year to making the NCAA tournament but fell in the A-Sun semi-finals.
Knapp Earned A-Sun preseason Pitcher of the Year for 2013, after winning A-Sun Pitcher of the Year in 2012.
“It’s nice to receive, but it’s more of a representation of my work last year,” Knapp
said. “This is a new year.”
It truly is a new year for the Eagles, as their team continues to mature together. With 19 upperclassmen on the 35-man roster, leadership and experience will help the Eagles to strive in this 2013 season.
“We’re a year older. Our team maturing is a big plus for us this spring,” Tollett said. “A lot of us are returning and have played together for three years,” Bednar added.
With a more experienced and mature team than the past few, the Eagles have a lot to look forward, too. However, they also have something to prove this season with receiving the honor of being the A-Sun’s projected favorite.
“It doesn’t really put more pressure on us, but it probably gives more fire to other teams,” Knapp said.