Tide unable to roll past Eagles 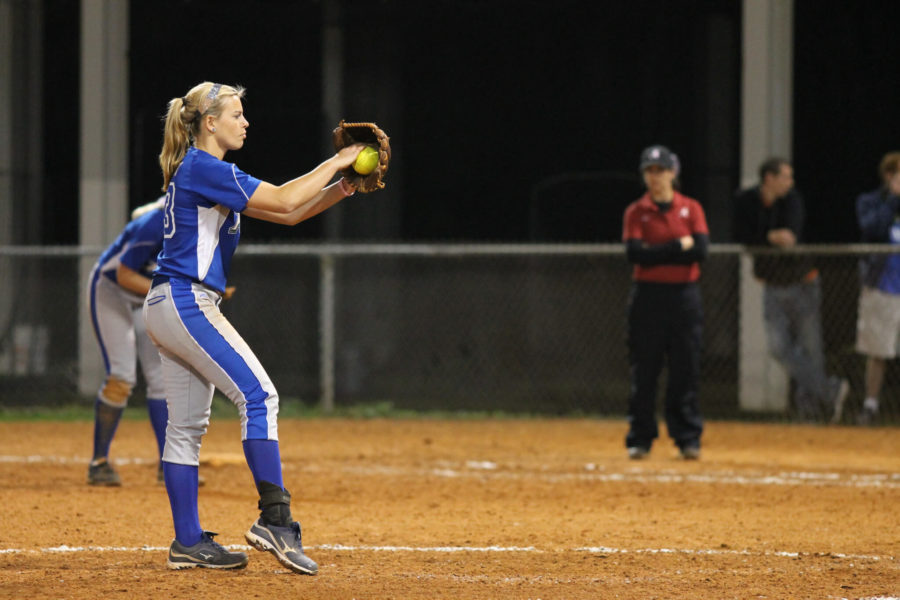 With the clock about to hit 11 p.m. Saturday night, FGCU sophomore softball pitcher Shelby Morgan took the mound. It wasn’t a typical Atlantic Sun foe, but a much greater challenge.
It was against the defending national champion and No. 1 team in the country, the Alabama Crimson Tide, in front of a record crowd of 1,109 at the FGCU Softball Complex.
“The support and amount of people tonight was incredible,” Morgan said. “The game started so late, so I was really surprised how many people came out to the game.”
The Eagles could not stop the Crimson Tide, losing 2-1. Morgan kept Alabama bats in check for the first three innings until Alabama second baseman Kaila Hunt sent a homerun deep into the Fort Myers night to take a 1-0 lead in the top of the fourth inning. Jackie Traina, the 2012 Women’s College World Series Most Outstanding Player and 2012 Southeastern Conference Pitcher of the Year, shut down the Eagles with 12 strikeouts and only gave up three hits. Traina, a Naples High School graduate, had additional run support in the top half of the fifth inning when the Tide manufactured a run to take a 2-0 lead.
That run proved influential, as junior Chelsea Zgrabik double off the center field wall and a Kaila Hunt error in the seventh pulled the Eagles within one. Traina killed the hopes of an Eagles upset with an easy out to end the game.
“It was a great environment tonight and a great atmosphere,” FGCU head coach David Deiros said. “Thank you to everyone for making this such a nice night especially student government, our student body and our marketing department. I am glad we were able to put on a good show for everybody. I hope our girls don’t go away to disappointed from it with this loss. I’m not a big believer in moral victories, but for us to be in there with a chance to win, we just have to tip our cap and admit we got beat by a better softball team.”
Morgan, 2013 Atlantic Sun Conference preseason pitcher of the year, pitched well despite falling short to Alabama. She went seven innings, allowing just seven hits but allowing two costly runs.
“She did great tonight; she did everything you can ask for from your number one pitcher, and she kept us in the ballgame,” Deiros said.
Morgan added, “The main thing I can take away from this is that I need to hit my spots. There are many pitches I would take back, and I can think of every one of them right now, but it’s something learned I can focus on.”
Many programs dream of hosting the No. 1 team in the nation, and this game is sure to be a stepping stone in the continuous building of the FGCU softball program.
“It really does depend on our girls if they want to bring that type of intensity, energy and focus. If we can do that consistently, then our team will be in great shape going forward,” Deiros said.