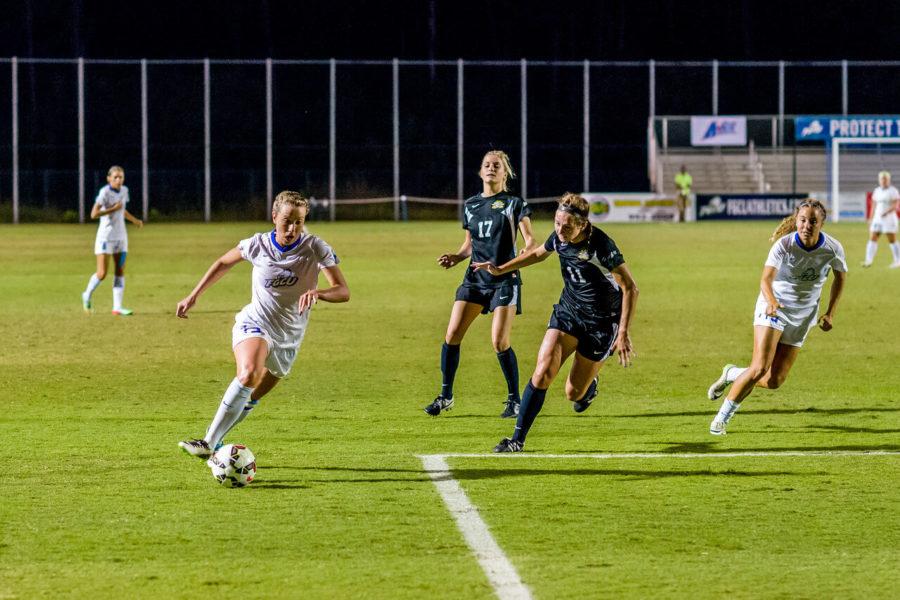 In a season opener in San Francisco on Saturday, August 20th, FGCU fell behind early after San Francisco converted from the penalty spot in the third minute. However, FGCU seemed to have USF back on its heels as the match progressed but could not break through until the second half.
FGCU outshot San Francisco 15-10 on the night, including an 8-4 shots on goal advantage, but could not capitalize by the end of the game.
One of FGCU’s best opportunities of the first half came from Tabby Tindell in the 16th minute. Tindell beat USF player, Presgrave, to the corner only for the ball to hit the post and run out of play.
By the end of the first half, the FGCU defense stood strong, keeping the match at 1-0.
Nikki Hudson started the second half by trying to get the Eagles an early goal, but her shot was wide of goal. Tindell and Rogers also had chances, but could not take advantage of these opportunities as the match came to a close.
Following Roger’s goal late in the second half, FGCU searched to gain possession and finish the game but sadly came up short. The Eagles fell 2-1 to the Dons in the season-opener.
The next day FGCU faced UC Davis at 2 p.m. in San Francisco. An early goal by Ali Rogers proved to be the difference in a 1-0 win for the No. 24 FGCU women’s soccer team over UC Davis.
After a tough loss the day before, the Eagles bounced back when Rogers collected a center pass from Tabby Tindell less than six minutes into the match. The Eagles outshot the Aggies 9-7 and earned six corners compared to four for UC Davis.
To begin the match, Tindell gathered the ball, found Rogers inside UC Davis’ area, which lead Roger’s to score from eight-yards out, against UC Davis goalkeeper Alexis Smith. The Eagles continued to take many shots on the goal, but ultimately came up short, keeping the score at 1-0 in favor of the Eagles.
Weck made her final save in the 58th minute which kept FGCU with a 1-0 advantage. With a strong defensive effort by FGCU, UC Davis was only able to shoot once in the final 30 minutes.
The Eagles allowed a few set piece opportunities late in the match but all were handled by Weck and her defense.
Next, the Eagles open their home slate with a strong pair. No. 9, North Carolina visits FGCU, Aug. 26 for the 2016 home-opener at 7 p.m. The weekend concludes with a match against current-No. 23 Ohio State Sunday, Aug. 28 at 6 p.m.