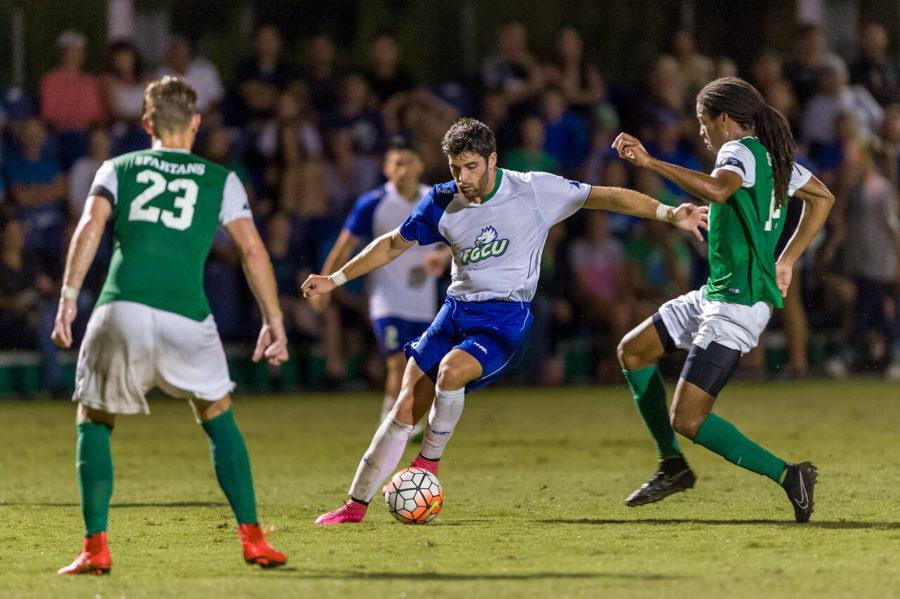 On Friday night the FGCU Eagles took on the Northwestern Wildcats to kick off the 2016 men’s soccer season at Martin Stadium in Evanston, Illinois.
The Eagles, who have won the ASUN Conference the last six years in a row, made some changes in their line up as the brought in Jiro Barriga Toyama on the wing, Thomas Delplace on defense, and Jared Brown as the Goalkeeper.
In the first few minutes, it appeared the Eagles had set the tone. Northwestern’s Elo Ozumba fired a shot at FGCU’s Jared Brown who made the first save of his college career.
About 22 minutes into the game, Northwestern drew a foul and earned themselves a penalty kick. Brandon Medina of the Wildcats struck the penalty past the Eagle’s Jared Brown, giving Northwestern a 1-0 lead.
In the 22nd minute, Northwestern’s John Moderwell received a yellow card. About four minutes later, FGCU’s Dennis Zapata received one as well.
The eagles fired seven shots at the net in a span of twenty minutes, but were unsuccessful in their attempts.
At half time the Eagles trailed the Wildcats 1-0.
Just one minute into the second half, FGCU Forward Albert Ruiz was called for a questionable foul in the box, earning himself a yellow card. This gave Northwestern a chance at their second penalty kick goal of the game.
Brandon Medina of Northwestern lined up to take his second penalty of the night and, just like the first one, beat Jared Brown, giving the Wildcats a 2-0 lead.
As 15 minutes passed, both teams went shot for shot. FGCU’s Preston Kilwien took a beautiful shot, only to have it saved by the Wildcat Goalkeeper.
72 minutes in, FGCU’s Dylan Sacramento was taken down inside the box, earning the Eagles a penalty kick of their own. Penalty kick specialist, Albert Ruiz, stepped up and kicked the ball passed the keeper. This kick cut the Wildcat lead in half, changing the score to 2-1.
FGCU’s Thomas Delplace was given a yellow card with just four minutes to spare.
In the 90th minute Eagle midfielder Kamar Marriott’s shot is just wide of the net.
After 90 minutes the final whistle sounded. Although the Eagles had almost three times as many shots as the Wildcats, the scoreboard favored the home team, showing a final score of 2-1.
Even though it was a hard fought battle, the Eagles came up just short of earning any points in their season opener. Best of luck to both teams in the future.
On Monday August 29th FGCU hosts the Michigan Wolverines in their home opener at the FGCU soccer complex.