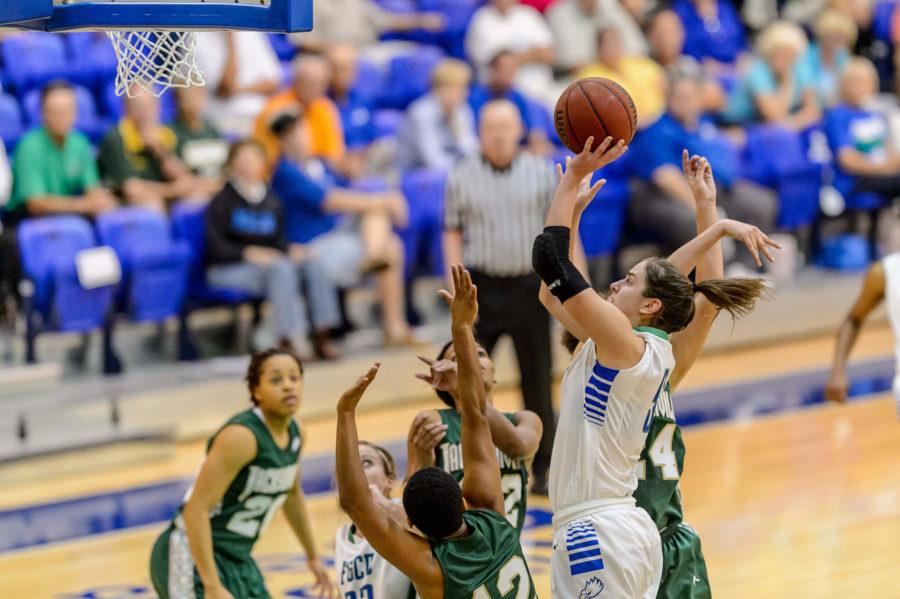 The women’s basketball team is conference champions. Already being assured a spot in the Atlantic Sun Championship, the Eagles clinched the one seed after defeating Stetson 72-55 on Saturday afternoon.
“I’m really proud of our team. We have so many young kids that have been able to work together,” said head coach Karl Smesko. “I’ve been really encouraged by the development of the team.”
Smesko feels that having a young team was a success.
“We have some great leaders that really helped bring the newcomers into how we do things here. The newcomers supported one another, which helped us become a better team as the season went on,” said Smesko.
I think that the team wants to be good. They want to win, and they want to meet the standards of our program. I think that there is a lot of internal motivation from our returning players setting the tone for our younger players.”
Smesko realizes that winning the conference does not guarantee winning the conference tournament.
“The best team wins the regular season but the best team doesn’t always win the conference tournament. We have to prepare ourselves as best we can to have the best tournament we can,” said Smesko.
Saturday’s leading scorer was Sarah Hansen with 27 points.
“Coming into the season, we basically started over,” Hansen said. “We had a whole new team and nobody expected us to be first in the conference. To come in and have the success we’ve had is a pretty amazing feeling.”
Hansen is impressed by the maturity of the team.
“I think that we grew a lot during the first two games of the season. We had a couple of games where we didn’t play as well as we wanted to,” Hansen said. “We have a bunch of girls who can step up on any given night so I think we’ve progressed a lot.”
Hansen feels good about this team going into the tournament.
“We still have a lot of progress that we can make to separate ourselves from the rest of the pack,” Hansen said. “I think that we’re making steps in the right direction, and I think that come conference tournament time we’ll be headed in the right direction.”
Hansen thinks the last two games of the season will test the teams mindset.
“I think our last two games (Mercer and Kennesaw State) are going to be really good learning experiences to see how we handle the win against Stetson,” Hansen said.
The Eagles’ first round A-Sun Tournament game will be on March 6 at Mercer University.