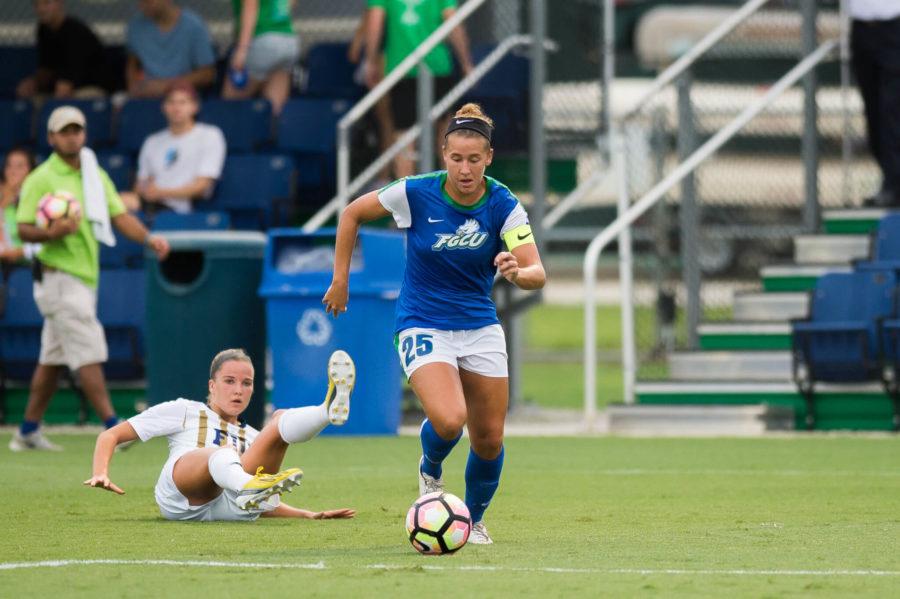 Reported by Miguel Rodriguez and Shylah Soares
After a loss to Ohio State in its home opener, the FGCU Women’s soccer team notched its first win at home with a 1-0 victory over FIU.
“Great news, we won,” FGCU Head coach Jim Blankenship said. “It probably wasn’t our best performance but it says a lot to find a way to win.
Both teams came out very flat in the early part of the contest, losing possession in the final third on multiple occasions. The teams both showed signs of life here and there but the first half was full of poor execution in the final third of the pitch.
“Second half, we really made a conscious effort as a team to turn it around and get more shots up on the board and start attacking more effectively,” FGCU Forward Tabby Tindell said. “I think we were able to do that and, thankfully, we got away with a goal.”
As the second half started, the Eagles turned the game around, coming out quicker, stronger and more aggressive.
Despite heavy rainfall and high winds, FGCU dominated possession of the ball and in return had 8 shots on goal.
In the 80th minute, the Eagles found the breakthrough goal that would lead to the win. Emilie Olsen took the ball down the right flank past an FIU defender playing Paulina Speckmaier, who whipped in a cross toward a goal that was headed home by Tindell. The goal marks Tindell’s first goal of the season and the 53rd of her career.
“Second half, it changed. Our guys had a little bit more energy and kept going at it and ultimately got the goal for it,” Coach Blankenship said. “I’m happy for a win. It’s not easy at this level to win games and it’s important that you get on the right side and I’m really proud of them in their effort in the second half.”
Next up for FGCU is Alabama. The Eagles battle the Crimson Tide at the FGCU soccer complex on Sunday, Sep. 4 at 1 p.m.