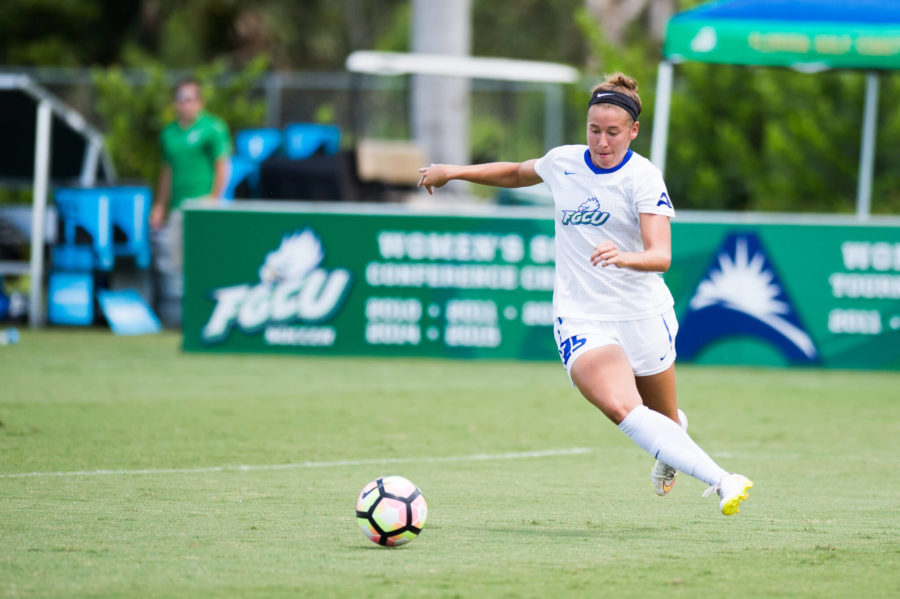 The FGCU women’s soccer team split its pair of in-state matchups on Thursday and Sunday, defeating Miami 1-0 before falling to UCF 4-3 at home.
Traveling to Coral Gables and looking to avenge their 1-0 loss against the Hurricanes last season, the Eagles came out strong offensively, outshooting Miami 5-3.
Matching up evenly on both sides of the pitch, the Eagles and Hurricanes created a couple of chances for an early lead, but neither team was able to find the back of the net.
The Eagles controlled possession in the early going of their contest, but failed to convert in the final third continued in the first half.
The second half began with an opportunity for Miami with a corner kick, but the Eagles picked up where they left off, controlling possession.
All of FGCU’s possessions finally payed off when a cross by Ali Rodgers met the head of Tabby Tindell who headed the ball into the back of the net after getting free from the defense with a run to the far post to put the Eagles up 1-0.
With a chance to level the game at one in the 72nd minute, a diving header by a Hurricane was blocked by Melissa Weck to keep Miami off the board.
With a chance to push the game to an extra 20 minutes of action in the 90th minute, the Eagles’ backline held the Hurricanes offsides to ensure a 1-0 victory over Miami.
“It was a phenomenal win,” FGCU head coach Jim Blankenship said in an FGCU athletics press release. “It was a great performance and a great result on the road. We really played well and I’m pleased with the progression as we go. Each week we seem to be getting better and better. We beat a very good team that’s having a really good year. They’re very dynamic and dangerous and we did a great job keeping them at bay.”
Coming off of a big win on the road against Miami, FGCU traveled back to the FGCU Soccer Complex to take on UCF.
After struggling all season to produce goals in the first 45 minutes of the game, the Eagles were finally able to put a goal in the back of the net in the fifth minute.
After collecting the ball off of a corner, Tabby Tindell swung the ball out to Meaghan Mulligan whose cross met the head of Paulina Speckmaier who powered the ball into the back of the net to give the Eagles an early 1-0 lead.
25 minutes later, FGCU doubled its lead when Tindell collected the ball in the midfield, speeding past the Knights’ defense earning a one-on-one opportunity against the goalkeeper, which she put in the back of the net to give the Eagles a 2-0 lead.
With FGCU on the verge of entering the half up 2-0, the Knights struck back after Carlin Huegli put the ball in the back of the net from a ball played over the top by Jen Vera to bring UCF within one goal at the half.
Starting the half after letting the Knights bring the game within one goal, the Eagles jumped out of the gate in the 56th minute.
After receiving the ball on the left flank from Mulligan, Tindell danced past her mark curling a shot to the near post past a frozen keeper, giving her a brace in the match and the Eagles a 3-1 lead.
After being in the driver’s seat for an hour of the 90 minutes, the Eagles quickly took a U-turn for the worst.
Despite being down one goal, UCF refused to give in to the Eagles cutting the lead to one once again after Carol Rodrigues’ goal of a rebound brought the game to 3-2.
18 minutes later, the Knights found the equalizer after a free kick taken by Carrie Lawrence found the feet of Bridget Callahan, who slide the ball past Weck to tie the game at three.
The Knights completed their comeback in the 85th minute when Hannah Debose collected a rebound, after an attempted bicycle kick by Rodrigues, beating Weck to give UCF a 4-3 lead in the dying minutes of the match.
After shocking the Eagles with an electric comeback, the officials sent the teams to the locker room with 3:41 seconds remaining in the match when lightning struck within seven miles from the pitch.
The Knights traveled back to Orlando with a hard fought road victory, as the teams never graced the pitch for the final three minutes, giving the Knights a 4-3 win.
“That’s a tough way to go down,” Blankenship said in an FGCU athletics press release. “To have a 3-1 lead and not be able to close it out hurts. We had our chances to finish them off but we just couldn’t. We’ll learn from it and get ready for Thursday.”