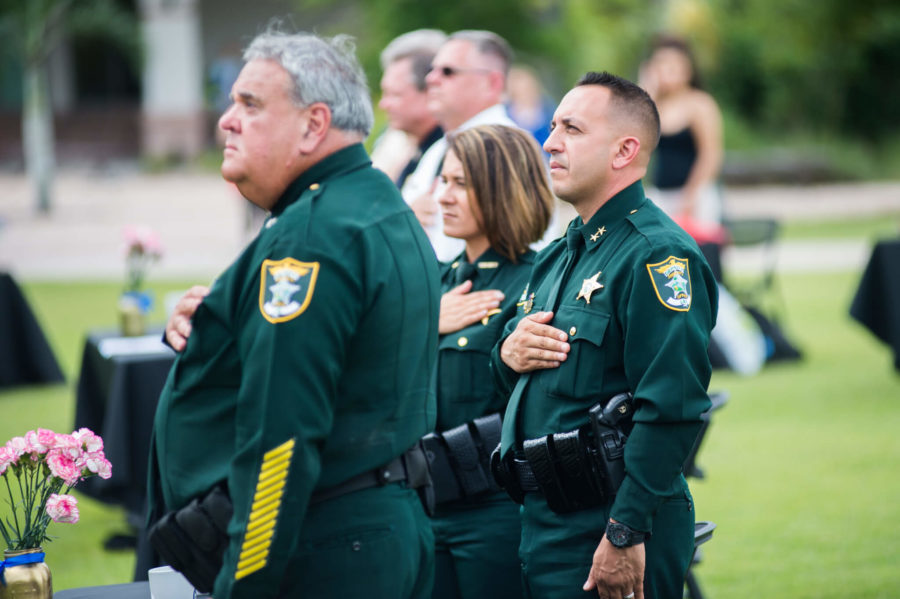 The foundation of our country was shaken 15 years ago after the attacks that occurred on Sept. 11. Here at FGCU, members of Student Government took the time to reflect on the events that occurred during the 9/11 Remembrance Ceremony at the Veteran’s Pavilion on Monday, Sept. 12.

Wade Henry, Director of Governmental Relations with FGCU Student Government, took on the privilege of organizing the 9/11 Memorial event, which was attended by staff, students, and public officials at 11 a.m. This was his first year organizing the event.

“I want to highlight the growth of our country,” Henry said. “As to how we have overcome and how we are moving forward and uniting together as a nation.”

The event included black-cloth covered tables spread across the lawn, accented by small arrangements of pink flowers on each table. Occurring in the shadow of a proudly waving American flag, the ceremony began with a Pledge of Allegiance and the singing of our National Anthem, followed by a Spoken Word presentation by student Victoria Clayton and a brief introduction of events by FGCU President Wilson Bradshaw.

The program continued to allow anyone in attendance to share their stories from the day, ranging from speakers who were in New York on the day of the attacks to those who shared the way the events affected them from across the country.

Marceno was working as a police officer with the New York Police Department during the time of the attacks and, although he was not on duty, he still recalled, “I immediately knew that we were under attack and that moment changed the world forever.”

Among other speakers was Laurie Babcock, Coordinator of Event Planning & Compliance with FGCU Campus Reservations. Babcock had recounted her days during and after the events living near New York City, but was quick to remind us, “Everyone I met had a 9/11 story. Mine is not unique. It’s just mine.”

Babcock touched on the very aspect we need to hold close during our times of remembering the events of Sept. 11, 2001. Through shared stories and accounts from that day, and in honoring the lives lost and the many heroic efforts, we all must stand strong and stand together. Just as we stood on that day. Just as we stand together 15 years later, reflecting on the day that changed America.