Brooke Sweat returns to FGCU after competing in the Rio Olympics 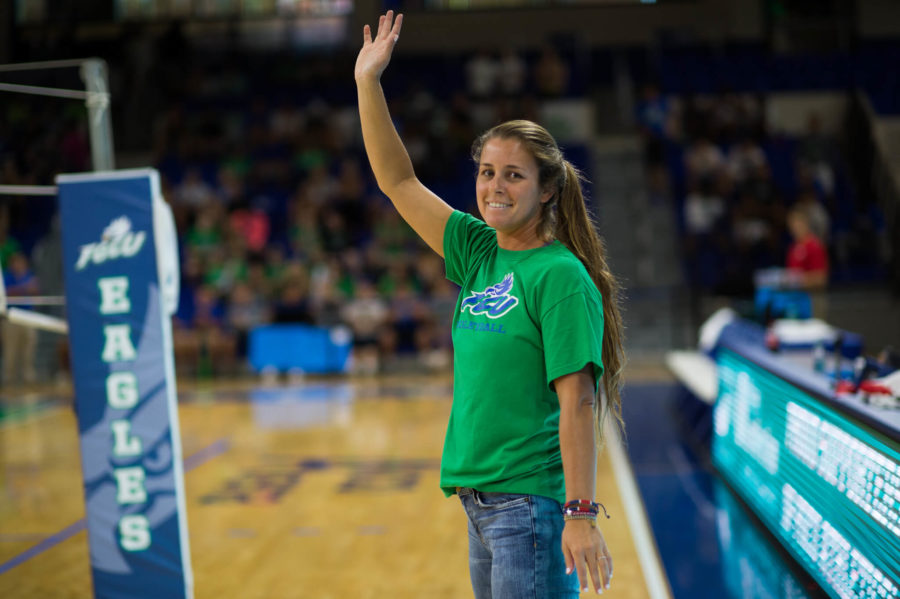 On Friday night, Alico Arena had a surprise guest. After the second set of FGCU women’s volleyball game versus the University of South Alabama, former FGCU volleyball star and recent 2016 Olympian, Brooke Sweat came back to her stomping grounds.

Nearly a month after the start of the Olympics, FGCU’s own olympian is finally back in her hometown. Brooke Sweat amazed players, fans and coaches as she returned to the court she once played on.

The reception upon Sweat’s arrival has been nothing but positive.

“It’s really special,” Sweat said. “I was really fortunate enough to go to a school like FGCU. It’s such a tight-knit community, and they’ve been such a big support over the last four years, not just with the Olympic run, ever since I graduated.”

Sweat is a 2008 FGCU grad and Fort Myers native. She was a part of FGCU’s original volleyball recruiting class and played for the Eagles from 2004 to 2008.

Sweat and teammate Lauren Fendrick were two of the women’s beach volleyball teams representing the United States. Going into their pool play, the duo was ranked 15 out of 24 Olympic pairs.

“The experience was absolutely incredible,” Sweat said. “It was a little surreal, and in the opening ceremony, when we were walking next to Kyrie Irving and all the basketball team, we thought, ‘Is this happening?’”

Unfortunately, Sweat and Fendrick were eliminated after their third preliminary loss. However, they had the opportunity to compete against teams such as Poland, Brazil and Russia. Back in the states though, Sweat and Fendrick had a chance for redemption.

“The results didn’t come our way, and we didn’t play our best volleyball down there,” Sweat said. “We came back to the states and had an international tournament here and placed fifth against the same teams that were in Brazil. It was just a week late; we were just off of our game.”

Future play for Sweat is unknown at this point, but she is happy to be home and back with her family. A surreal experience in her life may take months to understand, but for now, Sweat can say her entire experience in Brazil was “insane.”

“It’s just hard to take it all in right now, but I think if you give me a few more months, I’m going to look back at this and be like, ‘Did this really happen?’”